(From left) Wan Latiff, Belgian ambassador Daniel Dargent and Fabry at the exclusiveinterview.

MALAYSIAN companies, whether big, small or medium-sized enterprises (SMEs), now have another avenue to penetrate the vast European market.

This is by leveraging on Belgium’s northern region, Flanders, particularly on its strategic location as an entry point.

It has the highest density of European distribution centres in all of Europe, making it one of the best places for setting up logistics activities.

About 60% of Europe’s purchasing power is located within a 500km radius of Flanders, which means the continent’s main markets can be reached in less than 24 hours.

Boasting four international seaports and three international airports, it is among the world’s best in terms of density of road, railroad and inland waterway networks.

The highways are linked to France, Germany, the Netherlands, and Britain via ferry links or the Channel Tunnel.

Port of Antwerp is the largest in Belgium and second largest seaport in Europe, with 14,417 seagoing ships accounting for 76% of total freight volume of Flemish ports.

It is also the largest chemical cluster in Europe and second largest worldwide.

“This can be facilitated through strategic partnerships and by addressing specific key industries such as logistics.

Among Malaysia’s major exports to Belgium were optical and scientific equipment, electrical and electronic products, textiles, apparel and footwear.

From January to September, Malaysia’s total trade with Belgium amounted to RM5.7bil, registering a 13.7% growth while trade with the European market increased by 17.3% in the same period.

“We are pleased with the development and are confident that trade with Belgium and Europe will continue to grow. Hopefully, we can garner a 5% increase in trade with the European market next year,” added Wan Latiff.

With the recent tax reform by the Belgian government, Wan Latif encouraged Malaysian companies to take up the opportunities available and capture a share of this developed market.

According to Flanders Investment and Trade (Singapore) investment and trade commissioner Luc Fabry, the cost to do business in Belgium is much lower, especially with the recent corporate tax reform.

“It’s easy opening a company in Europe. If a Malaysian company sets one up, they are considered a European company and will receive the same incentives because we don’t discriminate.

“In Flanders, any Malaysian company which sets up here can enjoy the same benefits as a Flemish company, including subsidies, training grants and R&D support.

“Over 85% of businesses in our country are SMEs, so we know and understand what you’re looking for.

“Going into Belgium is basically going into the whole European market,” he said at an interview during a seminar held at the residence of the Belgian ambassador in Kuala Lumpur.

The seminar, titled “Doing Business in Belgium”, provided a clear overview on the business opportunities available in Belgium, especially in Flanders.

Jointly organised by the Belgium Embassy, Flanders Investment and Trade and Matrade, the event saw the attendance of executive decision-makers of companies interested in expanding to the European market.

Belgian ambassador Daniel Dargent said during the last decade, they observed the rise of Malaysia as one of the leading countries in South-East Asia.

“Today, Belgians and Europeans look with wonder and admiration towards Malaysia and Asean’s economic performance, with growth rates we can only dream of,” he remarked.

Dargent added that bilateral relations between the two countries has evolved progressively to include trade and investment as a major focus.

“We look forward to seeing Malaysian companies develop their investments and distribution centres in Belgium to further boost economic ties between our two countries,” he said.- 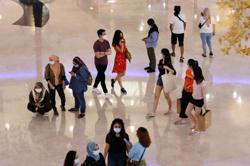