Own a home in the city centre

PROPERTY developer Impianika Development Sdn Bhd is targeting to launch the second phase of its Razak City Residence by the end of the year.

“With its close proximity to the city centre, Razak City Residence offers buyers the advantage of living nearby at an affordable price.

“Since the launch in April, we have received tremendous response with a take-up rate of 75%. We are expecting it to be sold out by the end of the year.

“We are planning to launch phase two at a slightly higher price and perhaps include more furniture,” he said.

Chang added that Impianika is planning to unveil phase three, which comes in two blocks and offers floor layouts similar to phase one, in the middle of next year.

“Phase four with four blocks, will have the biggest built-up of 1,100sq ft,” he said.

A total of 17 out of 30 local artistes also signed their sale and purchase agreements for units at Razak City Residence.

“We understand that owning a home can be quite challenging so we wanted to offer local artistes a chance to have their own property.

“Most of them work on a contract basis and would find it difficult to own a home,” Chang said.

With a total gross development value of RM3.5bil, the 12-block project is currently under way and is expected to be completed by April, 2022.

The project will also feature a retail component comprising two storeys of 121 shop-offices below the residential units.

The upcoming MRT station in Bandar Malaysia and the KL-Singapore High Speed Rail will further boost the connectivity and convenience of the development. 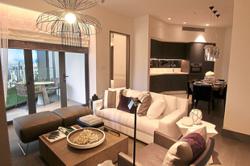