Proving their mettle on Asian platform 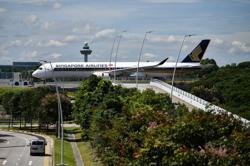 Rozali, who received the Outstanding Leaders In Asia award, is flanked by Bryant and Shanggari.

The awards organised by MORS Group, champions revolutionary leadership and sustainability in companies operating in Asia.

Among local names recognised at the event was Dr Jeffrey Goh Sim Ik, who founded the Morganfield’s brand in 2011.

Goh, a Malaysian dentist turned entrepreneur, was named Entrepreneur of the Year for his ‘‘sticky bones” restaurant concept.

For two consecutive years from 2014 to 2016, the brand was voted the best brand in F&B under the Mid-Western Casual Dining Cate-gory by the Brand Laureate body.

Meanwhile, AirAsia Berhad emerged as one of three industry champions.

Its chief executive officer and executive director Aireen Omar was one of only two Eminent Leaders in Asia, specifically singled out for assuming treasury functions in 2009, at the peak of the global financial crisis, and managing to raise funds for the entire AirAsia group despite the volatility and pessimism of the economic climate.

Chong Chee Hing, chief executive officer of Corporate Excelsior (M) Sdn Bhd, was lauded for choosing to bank on innovation rather than engage in price wars in the cement-based product market.

This has resulted in the brand being the first non-native marque accepted for use abroad by the National Housing Agencies of Thailand, Sri Lanka, Brunei and Libya.

Tan Sri Rozali Ismail’s vast experience in various fields, including property development and the utilities business, made the executive chairman of Puncak Niaga Holdings Bhd yet another of the Outstanding Leaders In Asia.

Rozali’s roster of leadership and entrepreneurial skills are supplemented by his commitment to activities outside his business empire, such as his role as president of non-profit organisations that look after public interests such as the management of water as a public resource.

Arvato Systems Malaysia Sdn Bhd was the only Malaysian company on the list of Top Companies To Work For In Asia.

The international service provider of digital technology believes that a higher quality of life improves productivity, creativity and shareholder value.

Therefore, to encourage work-life balance, the company offers a slew of leave and time-off options, in addition to a flexible working-hours policy as well as a work-from-home country policy.

“This year’s Awards in Corporate Excellence and Sustainability are highlighted by organisations that have strived to integrate innovative approaches to sustainable business into their operations.

‘‘The winners have been able to show us the key ingredients towards building meaningful sustainability practices that not just improve their business but enhance their relationships and truly make an impact in their communities,” said Aces Awards lead juror Dr Jayanthi Desan.

In attendance were representatives from 44 corporations who voluntarily submitted to a management process audit in order to be eligible to contest in one of seven categories of awards.

This voluntary self-nomination is one of the most compelling points of the ACES as it is fuelled by a company’s desire to see how it stacks up against others on a similar playing field.

The function was graced by founder of Kaden Boriss and ACES Awards chairman Hemant K. Batra, who was also on hand to present the awards to the recipients.

“This year’s pool of aspirants showed a marked increase in numbers, which is testament to the greater emphasis corporations are placing on leadership, sustainability, corporate social responsibility, eco-consciousness and community care.

‘‘As this is the purpose of the ACES Awards, I hope their stories signal hope in a fast-moving world full of big challenges and inspire us to focus our gaze on the exciting track ahead,” said MORS Group chief executive officer Shanggari Balakrishnan.