Sometime by Asian Designers is driven by Chooi (left), whose background is in advertising and strategic planning, and Wong, an experienced luxury bag product specialist.

Want quality handbags but baulk at the hefty price tag? The people at Sometime by Asian Designer offer a compromise — quality handbags designed in collaboration with celebrities and fashion icons at reasonable prices. MEK ZHIN has the story.

FOR those of you who often lament the fact that designer bags come with a hefty price tag, well, you’re not the only one.

Except in the case of Nicole Wong and Stan Chooi, they actually went and did something about it.

And what they did was to start Sometime by Asian Designers, a bag specialist company that offers quality designer bags for much less.

Chooi recalls an incident involving his ex-girlfriend and a branded bag some years back.

“She had only just started working but was insistent on getting a credit card from day one. After some months, she eventually got one and she maxed it out within a couple days just to buy a designer bag,” he relates.

It wasn’t until he met Wong five years ago that he learnt that the actual cost for making designer bags is far less than what’s shown on the price tag. What people were really paying for was the lifestyle.

A Sometime staff packing up a Niko-Niko bag.

“We want to deliver optimal quality designer bags without the traditional mark-up, and we have the expertise to optimise materials and resources to do this.

“We’re not out to change the world but we’re willing to disrupt the market,” Chooi says.

Sometime was established at the end of 2012 and, judging from its average sales of 1,500 to 2,000 bags a month, people seem to be head over heels for the concept.

Wong, who has a few years experience of working as a product specialist for designer bags, said that the top three things a customer looks for in bags are design, durability and practicality.

“As a product specialist, I know what works and what doesn’t for a bag design. My experience is mainly in refining the design and ensuring that the end product meets all the usual requirements people need from a bag,” she explains.

Bags from Sometime are made using microfibre, which Wong says has been the new leather for designer bags for some time now.

“It is easy to clean and lasts longer than top grain leather typically used for bags,” she adds.

As for the designer bit, Sometime often works with fashion icons or designers to come up with signature bag designs. The brand also carries its own range of bags.

To date, they have worked with 12 designers, including Wong who recently launched her signature bag, the Niko-Niko. The collaborations have resulted in 21 exclusive and limited edition bags.

Wong explains that the partnerships work in two ways, with the bags being either “designed by” or “inspired by”.

“When we say ‘designed by’, it means that the collaborator was directly involved in the creative process of designing the bag. However, sometimes what happens is we come up with the entire design based on ideas and information we gather from the collaborator, who we say is the inspiration for the design,” she elaborates.

Some collaborations don’t result in a bag, and Wong says this is usually because they are not able to come to a middle ground with the collaborator.

“Things don’t work out because the personality involved is too stubborn and stuck on a design that doesn’t work. At the end of the day, what we need is a design that can be mass produced,“ she states.

Chooi adds that they actively seek collaborations with certain people, but, of course, people also seek them out.

Christy Ng flaunts the Companion II, on which she collaborated with Sometime.

“Our name is our unique proposition. We carry designs by Asian designers, which opens the door to this particular fashion segment to many people.”

“In fact, we are planning for an online design submission system.

“We will go through it with a fine-toothed comb and, if it checks all the right boxes, we will manufacture the bag. Many people have ideas but they lack the marketing or production capabilities to make it a reality, so this is where we come in,” he says, adding that this plan is only expected to come to fruition in 18 to 24 months’ time.

Sometime’s bags are produced in a factory in China. Contrary to popular belief that the factories there can only come out with less-than-stellar quality goods, China is actually the place to go to for designer quality bags.

“There really are only two places to go to for quality bag manufacturing: Italy or China. It’s more expensive in Italy, so China has become a hotbed for designer bag production. They began to grow a number of highly skilled bag-makers who are used to producing top-quality products,” Chooi explains.

Their company started off with a dedicated production line of eight such bag makers, but the catalogue has since grown to 38 — all from the same factory where some international designer bags are also produced.

Sazzy Falak and her Lela bag.

One of the most important aspects of bag design is prototyping, which Wong says is a process that can drag on anywhere from a month to half a year.

“It really depends on the design and how particular the designer wants to be,” she points out.

According to Wong, she has always had an interest in making bags and her aesthetics lean towards simple designs but done boldly.

The Niko-Niko is considered their bestselling bag to date, with the first batch of 1,500 bags sold out within three days of launching.

“We don’t reproduce our signature bags, done through collaborations. As for the others, we will restock once, and after that, we may open one pre-order session and that would be it,” Chooi says.

Sometime launches between eight and 10 new bag designs per year, he reveals.

Racks and racks of bags waiting for personal inspection before they are allowed to be shipped out.

More than half of Sometime’s customers are repeat buyers, and the company’s product return rate is at less than 0.5%.

“We accept product returns, which is usually because of manufacturing defects. But we don’t question the customer even when they are returning it because they didn’t like it. Sometimes a customer needs to see and feel a product before they know if they’ll truly like it or not,” shrugs Chooi, adding that there is a 14-day period for product returns.

He admits that they have had customers who were a challenge to handle.

“Even though the price difference is so obvious, there are some who insist on comparing us to branded bags, but what have you?” he says with a smile.

The bags from Sometime are priced between RM129 to RM229 and are available from their website.

Chooi says the company intends to move into the Singapore and Indonesia markets in 2016 and launch more collaborations. 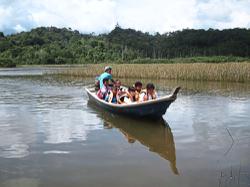 Are rewards for getting Covid-19 vaccinations really such a great idea?
Why Filipino politicians love ivermectin
'Lost paradise' as Mediterranean edges ever closer to home
Try our specials: cicadas!
Cut down on grocery runs to stay safe
‘Worst case scenario’ thinking causes people to rush to supermarkets
Census 2020 is vital for nation-building
All in the family
Essentials for a new start
Correcting people’s misconceptions