What it doesn’t say is that the speed at which a person learns new things can differ by quite a lot. What one person could learn in a minute might take another individual 10 minutes to get, which is a whole nine minutes longer.

And when you think of this time in terms of days, weeks or even years, then you start to see what a big difference it all makes.

This is where BrainFit Studio, founded by a team of child developmental professionals in Singapore, comes in. 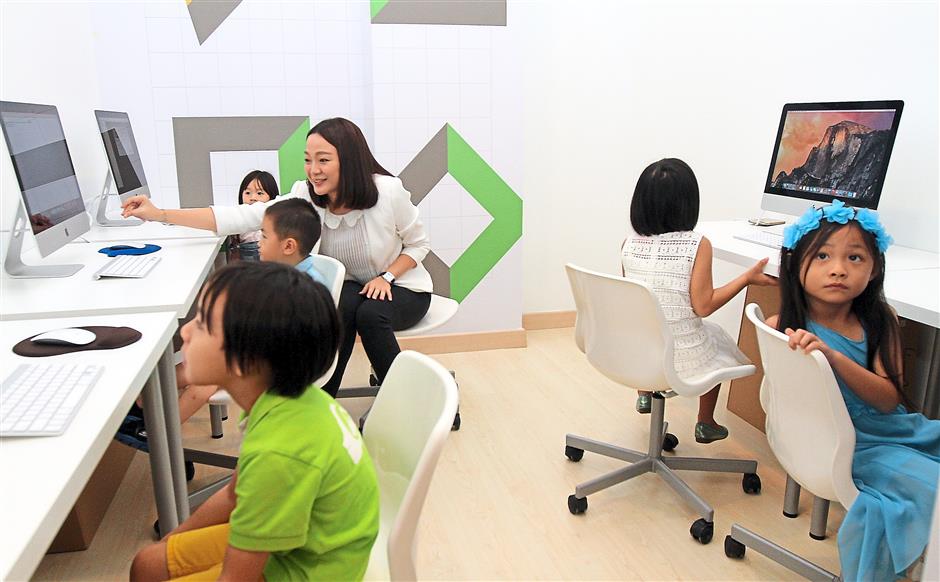 Tan showing the children the computers used in the auditory and focusing modules.

Harish Babla, managing director and CEO of Global Franchise Masters, explains that BrainFit is, as its name suggests, all about training the brain’s fitness. Or in other words, their cognitive and learning skills such as memory and attention.

He says scientists have discovered that academically-smart children who lack cognitive skills usually turn out to be not too successful in life.

They stressed the need for parents to understand that academic performance is only half the story in ensuring their kids’ success.

According to BrainFit’s website, scientists working on mapping human intelligence have recently discovered that intelligence does not reside in any one part of our brain.

The general intelligence (IQ) and emotional intelligence (EQ) involves a network of interconnections between a few critical brain areas related to attention and working memory, language, visuals and body perception. Harish explains that BrainFit focuses on working on these areas, which they call the “four brain pillars”. The introductory sessions included the parents.

“Our brains have neurons which is where information is processed, and it can be connected to thousands of other neurons. This situation is similar to one town being connected to other towns via all kinds of routes such as highways, trunk roads and even dirt roads.

“One can get from one town to the other using any of these routes but the quickest way would be by using the highway. This is exactly the same with our brains. It can be trained to be able to process information more efficiently,” Harish stresses.

He adds that training the brain as a whole is necessary.

The ability for our brains to improve are known as neuroplasticity and forms the basis of what is being carried out at BrainFit Studio.

In order to achieve this, says Harish, practice and repetition in the right way is necessary. And more importantly, the whole brain must be trained through an integrated approach.

BrainFit’s first Malaysian branch, under master franchise licensee BrainFit Educare Sdn Bhd, is at The Curve, Mutiara Damansara. Brainfit Educare holds the rights for both Malaysia and Brunei. Currently, only the scholar programme catering to four- to 16-year-olds are available.

“Each term lasts about eight months and features four modules which are repeated once throughout the term. But parents should keep in mind that, like any other fitness programmes, once stopped it is likely the person will go back out of shape,” Harish says. Parents sitting through an introductory session.

According to Harish, practically speaking most children stop their BrainFit training at the age of 12 or 13.

“I think it’s mostly because when they reach that age they have other priorities and activities that they are involved in,” he says.

Every term at BrainFit starts and ends with an assessment of the mind using a combination of eight internationally acclaimed methods, as well as their own proprietery programmes, in order to come up with a comprehensive report called the cognitive map.

This gives the trainers a clearer idea of where is the child at in terms of brain development, and this enables them to create a customised training schedule for the child.

“This is meant to engage them at their level of development according to their own abilities because not everyone’s capabilities are the same, even if they are the same age. Then we apply the 80:20 rule, which is defined as 80% of the activities can easily and naturally be done by the child but the other 20% is done with difficulty.

“It then becomes our job to teach that 20% until it becomes easy and natural to them, which then makes it into the new 80% and allows the child to improve by further inducement of the ever-increasing 20%,” Harish explains.

He gives examples on the practical uses of the BrainFit training. 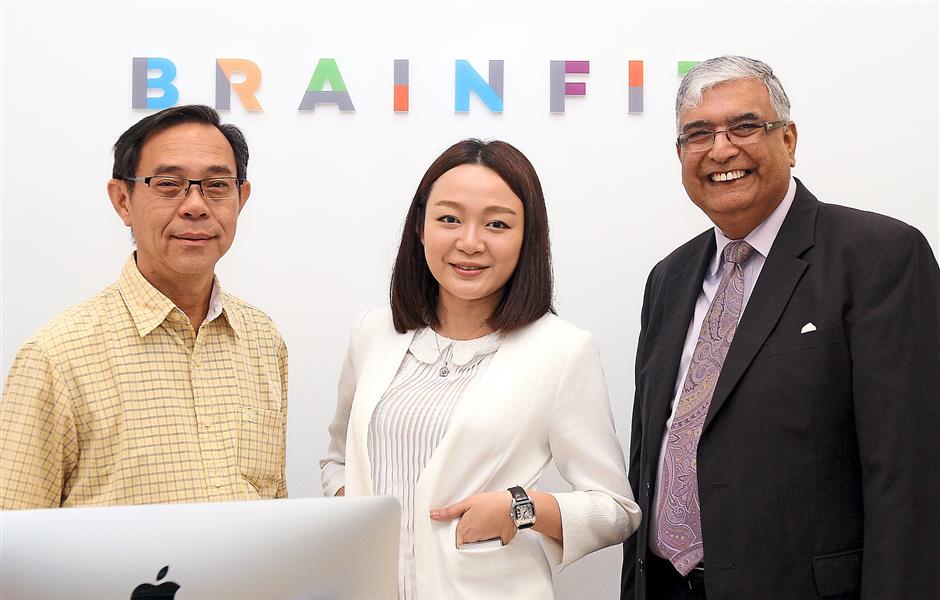 “Motor or movement skills are one of the most primitive portions of the brain, and you will notice that one of the first things a baby does is try to grab things. We work on this because an uncoordinated child will also be the same as an adult.

“In the same room where we train the motor skills, we also implement vision skill training. Many children use their eyesight to get information, including lessons in class. If they are not able to process information quickly enough, they will get stuck and left behind in their lessons,” Harish says.

The room is equipped with trampolines, exercise balls and touch screens, allowing both types of trainings to happen simultaneously.

They use touch screen computers with various programs mainly for their listening and focus skills training.

“Everything seems simplified, but in reality, we do go quite indepth into each module,” he adds. The trampolines are a hit, alright. -Photos by Azlina Abdullah

Harish says they plan to introduce two more programmes in January next year: the baby programme for children from nine-month to two-year-old, as well as a junior programme for those between two and four year olds.

“We are expecting great reception for our programmes here because we believe in the universal truth concept and that parents, no matter where or who, only want a better and successful life for their children, and we can help their child achieve that,” he said.

Harish says that among the benefits observed in BrainFit students are the ability to pick up a second language and an overall improvement in learning.

“Our internal studies also show that after three to six months of training, their IQ can go up by eight points. And this, based on the standard deviation, means some 25% increase in IQ,” Harish reveals.

BrainFit Educare Sdn Bhd, led by Frena Tan and Robert Lim, is the master licensee here for the BrainFit Studio franchise, which was established in 2001 by Cherl Chia and a team of child developmental professionals in Singapore. Tan is the company’s managing director and will be running the company’s first outlet at The Curve and has experience in child-oriented businesses as well as having a passion for working with children while Lim runs a successful chain of retail stores.

Lim says that BrainFit Educare will be opening 15 centres within the next five years.

“We are targeting an average of three centres every year. We are already looking at several locations including Cheras and Klang,” he says, adding that they will target suburban spots with many residential areas.