Fazley Yaakob is executive chef at his bistro and has the final say in everything.

Singing and acting is fine and dandy, but cooking is what gets celebrity Fazley Yaakob all fired up.

Anyone can have a go at cooking but to cook really well, you need to have a real passion for it. And that’s something that celebrity-turned-chef, Datuk Fazley Yaakob, owner and executive chef of SukaSucre Bistro has in spades.

“A good chef has to be passionate about the food he cooks. He should understand the food he cooks, the flavours that go together, and he has to be consistent,” says the singer-actor and motivator who found himself in the culinary spotlight after winning first place in the MasterChef Celebrity Malaysia reality show in 2012.

The win guaranteed him a place in the prestigious Le Cordon Bleu institute in Paris, where he earned a diploma in patisserie. Today, Fazley operates his own eatery, SukaSucre Bistro (which means “liking sugar”), at Wisma RYU in Taman Permata Cheras.

“The MasterChef exposure opened up a new chapter in my career that I never thought was possible – a chef. I’ve always loved cooking since I was young. Some of the recipes here are what I picked up from my maternal grandmother and my Mum,” says the 37-year-old, who has more than 650,000 followers on Facebook, Instagram and Twitter.

He says learning from the French chefs was something that he could never forget. Classes were taught in French and translated into English, so Fazley got to learn French as well during his time at Le Cordon Bleu.

“Every single technique is different from what I learnt in books. The nine months of training is equivalent to working at a restaurant for several years. It is such a unique school. “The Cordon Bleu Paris training is something that can benefit all chefs outside of France. And learning cuisine from a French chef is really wonderful,” says Fazley, who started his working life as a recording artist at 18.

When he came home last year, Fazley started to consider cooking as a career. The first thing he did was to supply his delicious macaroons and other desserts to the Sumbs Café in Shah Alam. His modest offerings became very popular within a short time. 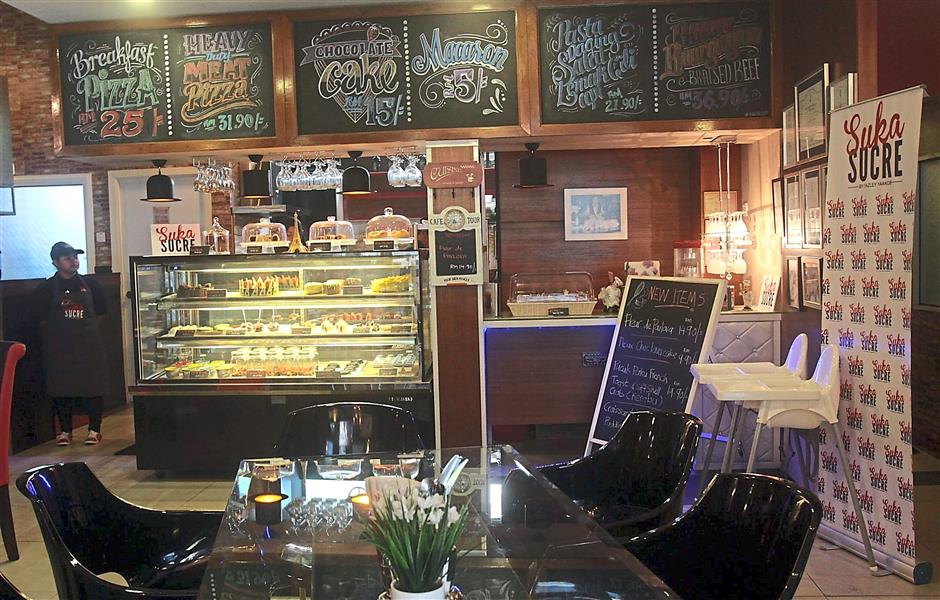 The interior of the SukaSucre Bistro.

Encouraged, he decided to venture out of his comfort zone and opened SukaSucre, a culinary adventure that promises to take patrons “from Rembau to Paris.” The bistro in Cheras is now a favourite hangout among celebrities.

He had a hand in the interior décor of his bistro, giving the place a quaint, Parisian-inspired 90s café ambience. The place cosy and inviting, with classic French music playing softly in the background – perfect for enjoying the food as you chat or unwind after work.

Fazley is assisted by his wife, Datin Azrene Ahmad, who is also the head cake designer and image consultant. 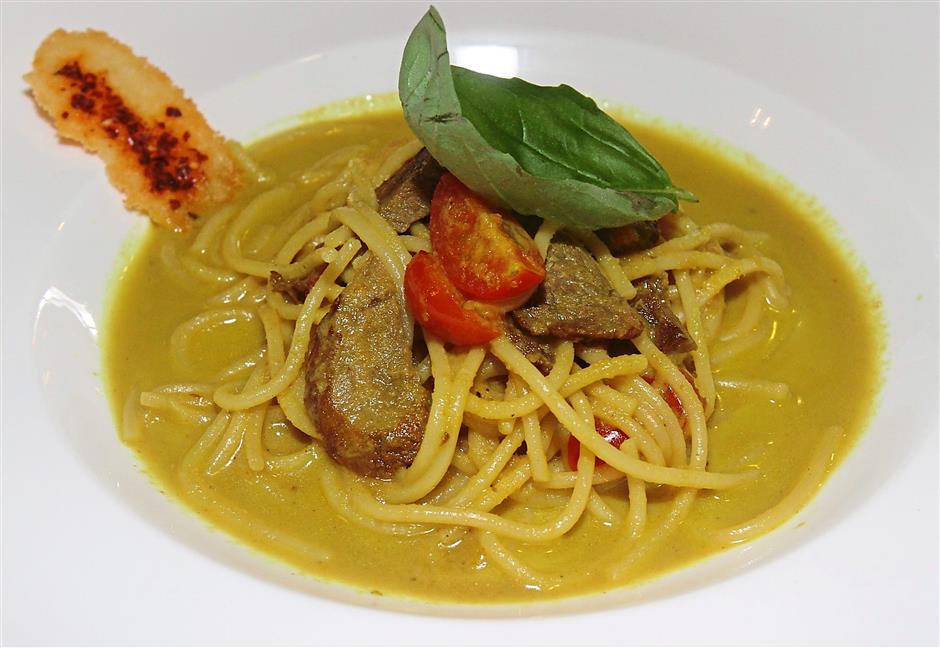 The Pasta Daging Salai Lemak Cili Api is unusual, spicy pasta dish that takes you from Rembau to Paris.

As executive chef, Fazley has to do more than just cooking. He oversees the whole operation, which includes managing his eight workers, the inventory and cleanliness. He also develops the menu and supervises the kitchen.

He has the final say on everything from taste, menu items and presentation, to purchasing and answering complaints. This is not easy and a far cry from the glitz and glamour of the celebrity’s life that he is used to.

“I don’t mind slaving over hot fryers, ovens and grills to produce the kind of food I want my customers to eat. I do almost everything here from slicing, mashing, peeling, whisking, cleaning and even taking out the trash,” says the humble entrepreneur.

SukaSucre Bistro easily gets an average of 80 customers a day and is heavily booked on weekends. Fazley credits Le Cordon Bleu Paris for the unique menu.

“Some say the food here is exotic, some find it a bit adventurous but most of them love the food here,” beams Fazley, who concocted the signature macaroons of lychee, durian, roasted corn, chocolate, strawberry, pavlova, caramelised bananas. They are served with ice cream, pop cakes and salty patisserie. He has to whip up more than 50 plates of desserts every day.

Apart from the menu, Fazley is always coming up with something new, so there are usually surprises in the menu.

Although he is devoting so much of his energy towards cooking these days, singing is still very much a part of his life. Fazley, who has five albums to his name so far, released his latest single, Chocolate Cake, last year.

“I really treasure my experience at Le Cordon Bleu. I hope to train more students here and perhaps inspire them to be successful,” says this father of three, who still finds time to fulfil his other professional engagements like singing and motivational talks. Recently, he finished his third cooking book, My Sucre Story.

On top of it all, he is also managing his artiste management company, Fazley International Productions (FIPRO), which produces corporate videos, music videos and TV programmes for companies and singers. Oh yes, Fazly is also an ambassador for several product brands like Panasonic, King’s Ice Cream and Avon’s Chef Products.

Fazley is happy that he has been able to leverage his celebrity status to advantage.

“Fame is a huge tool. I’m so lucky, I have profited from it,” says Fazley who also conducts macaroons workshops at his SukaSucre Kitchen.