A proud Kaerlan who topped the Under-10 and Under-12 Boys Foil category.

FOILIST Kaerlan Vinod Kamala-nathan proves that age is not a problem when it comes to fencing.

Through grit and determination, the 10-year-old pulled off an impeccable performance to top the Under-10 and Under-12 Boys’ Foil category in the 2017 FT Young Stars Fencing Championship.

In the Under-10 category, Kaerlan from Blade Fencing Kuala Lumpur defeated Heng Yu Shern with a perfect score of 8-0 in the semi-final and sailed through a 8-1 victory against Uzair Zafran in the final.

Meanwhile, in the Under-12 category, he beat Jovan Ooi 10-6 in the semi-final.

“I wanted to try my luck in the older category and when I did well in the earlier rounds, I started to gain confidence.

“During the final match with Maurice Lim, I give my all and I am proud to have won and emerge champion in the older category,” he said after receiving his medals during the championship held at Tunku Abdul Rahman University College Sports Complex.

A fencer wearing a fancy mask that resembles Marvel Comics character Deadpool during the championship.


Organised by Federal Territory Amateur Fencing Association (FTAFA), the championship had one of the largest participation with over 200 local and international fencers taking part in the two-day championship that consisted of 18 categories.

In the Under-15 Girls Epee category, Taiwanese fencer Wu Hsin Mei had a neck-and-neck battle with Ho Li-Enn before sealing the match 15-13.

She took on Elysia Damaris Ghadzali and won 15-10 in the final.

“This is my first time participating in a championship overseas and I am thrilled to have won the Under-15 Girls Epee category.

“Throughout the competition, I tried to stay relaxed and focused during the matches,” she added.

Wu, however, could only manage a silver medal in the Under-15 Girls Foil category after losing 10-2 to Philippa Ong from Touche Fencing Club.


FTAFA president Shirely Wong said aside from providing a platform for young fencers to shine, the championship also focused on friendship.

“These participants are going to fence with each other in years to come and through sports, they can make friends with other fencers.

Wong also stressed on the importance of having different championships for grassroots fencers.

“It boosts the confidence of the fencers who win.

“The championship also hones their skills and is a platform for the association to identify talented fencers,” she said. 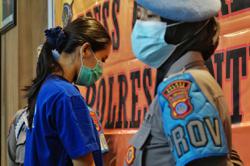