Jubilant mood: SMK Hamid Khan players celebrating their victory in the boys’ Under-18 category in the Penang Schools Floorball Championship.

BETWEEN them, SMK Hamid Khan and SMK Bukit Jambul retained all the three titles on offer in the Penang Schools Floorball Championship 2015.

For the second year running, SMK Hamid Khan defeated St Xavier’s Institution in the final to bag the boys’ Under-18 title in the tournament held at the Balik Pulau Market Community Hall over the past two weekends.

SMK Bukit Jambul held on to their girls’ open and boys’ Under-15 crowns in constrasting fashions.

While the Bukit Jambul girls were in a class of their own as they cruised to the gold medal, the boys’ Under-15 team had to slog hard.

In the boys’ Under-18 final, defending champs SMK Hamid Khan were quick off the blocks and stunned St Xavier’s with early goals from Zachary Choo and Jesswin Jayager.

Although St Xavier’s managed to reduce the deficit just before the break and staged a late fightback, SMK Hamid Khan held on to their lead until the final whistle.

“We have been training together for the past five years and know each other very well.

“We rely on collective strength instead of individual brilliance to win our matches.”

There was more heartbreak for St Xavier’s when they also lost the boys’ Under-15 final.

Their opponents SMK Bukit Jambul netted the only goal of the match with less than three minutes left on the clock.

Both teams were evenly matched but the stalemate finally ended when SMK Bukit Jambul player Sangkhara Hari struck with a sweet shot from the right flank.

“Although 12 out of the 15 players in the team were making their debut this year, we were confident of retaining the Under-15 title,” said SMK Bukit Jambul boys’ Under-15 skipper Chan Ze Ee.

“The players were totally committed in training and we worked hard to prepare for this tournament.

“Now most of us in the team will move on to the Under-18 category next year and our aim is to dethrone SMK Hamid Khan in 2016,” he said.

In the girls’ open final, SMK Bukit Jambul were simply too strong for their opponents Methodist Girls School, easily winning 4-1.

“Considering that we had many new players this year, I am very happy with how things worked out for us,” said SMK Bukit Jambul team captain Jessie Lim.

“Our strong desire to win the gold medal propelled us to victory,” she added.

Although still lacking publicity and exposure, floorball is thriving in South-East Asia and will be contested in the Singapore SEA Games in June.

Penang is one of the most active and successful states in developing the sport in Malaysia.

At present, there are 18 players from Penang — 10 men and eight women — in the Malaysian floorball teams. 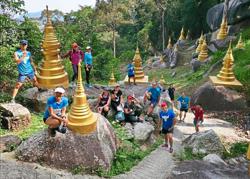