Jeonsa FC rise to the summit

Acrobatic style: Jeonsa FC’s, Muhammad Amirrul Ashraff (centre) gets to the ball while being pursued by two players from Iman-PJ Hiliran.

DEBUTANTS Jeonsa FC are making their presence felt in the Football Association of Selangor (FAS) league.

Jeonsa FC, playing in Group B in Division One, continued their battle for a quarter-final berth with a slim 1-0 win over Iman-PJ Hiliran in a keenly contested match at the Jalan Raja Muda Stadium.

Following the win, Jeonsa FC moved to the top of the 13-team table with 21 points. The fight for places in the last eight is getting intense with contenders — Bukit Rotan Baru, Kota Raja FC, SL-Zabag and Damansara — staying hot on the heels of Jeonsa FC.

Bukit Rotan Baru, who have also played eight matches, are second on 16 points. Kota Raja FC, the FA Cup runners-up, are the only unbeaten team in Group B.

After five matches, Kota Raja FC, who defeated Bukit Lanchong 3-0, are third on 15 points while SL-Zabag and Damansara have 13 and 12 points respectively.

Jeonsa FC team manager Kamal Daud admitted they have a tough task ahead in the league.

“It is getting very competitive. All our players are in the Under-18 age group. Most of them are students and were trainees at the AAB Football Academy in Shah Alam.

“We have created a platform for them to be involved in a competitive league. We did not set any targets for the players when the season started. “But after eight matches and encouraging results, we have to look ahead to the season with optimism. The other teams are also playing well and we cannot afford to take it easy.

“We have to continue winning to be certain of place in the quarter-finals,’’ said Kamal.

In the Premier Division, Team Force defeated Frenz United 4-1 in a Group D match. With the win, Team Force have 19 points and have qualified for the quarter-finals.

The Group A match between Kuala Langat DFA and PKNS was abandoned in the 40th minute after match official K. Rajan was assaulted. Kuala Langat DFA’s Rosnan Omar, who was yellow carded and unhappy with the referee’s decision, charged at linesman Rajan and started attacking the match official.

Referee V. Sivam flashed the red card at Rosnan and decided to call off the match. The score was then 1-0 in favour to PKNS, who had scored through Fairus Rosli in the 31st minute. 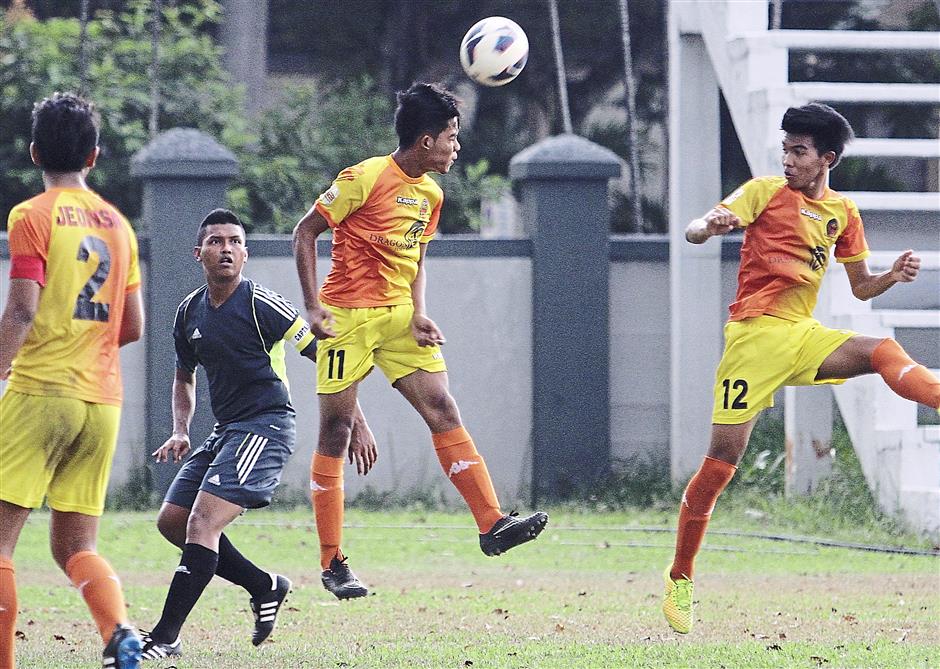 Emran said they had decided to award the match to PKNS with a 3-0 score.

“The players, who were involved in the fracas have been referred to the disciplinary committee. We have also given a stern warning to Kuala Langat DFA. We will monitor them in their next matches. We will not hesitate to punish them for any wrong doings and bringing disrepute to the league,’’ said Emran.

With the competition committee’s decision, PKNS are unbeaten and have gained three points. They are leading Group A with 13 points.

In Group B, Sultan Sulaiman Club (SSC), the newly crowned FA Cup champions, defeated Sri Remaja 5-2 to book their place in the last eight. The other three teams - Emkay-NPNG, Belia Selangor B and Anak Kalumpang-Teleflow - from Group B have also qualified for the quarter-finals.

Emran said they were on schedule to complete the season before the fasting month.

“Except for some minor incidents, we are on the right track. We have to thank the teams for their co-operation,’’ said Emran.