Featuring in the Under-14 category in the Maybank-Gosen-PBA badminton championship, the 12-year-old showed that she could match older girls when she captured the singles crown.

The U-14 girls doubles crown went to the top-seeded Penang BA pair of Choong Yong Sim and Florence who stopped another Penang BA pair Jewel Tan Sze Ting and Tan Yen Lynn 21-12, 21-15 in the final. Ting Yong (right) keeps a close watch as his partner Ee Wei executes a service during the game.

Jireh lived up to his top billing to be crowned the boys Under-10 singles champion.

He met state mate Ng Eng Cheong, a fifth-eighth seed, in the final. 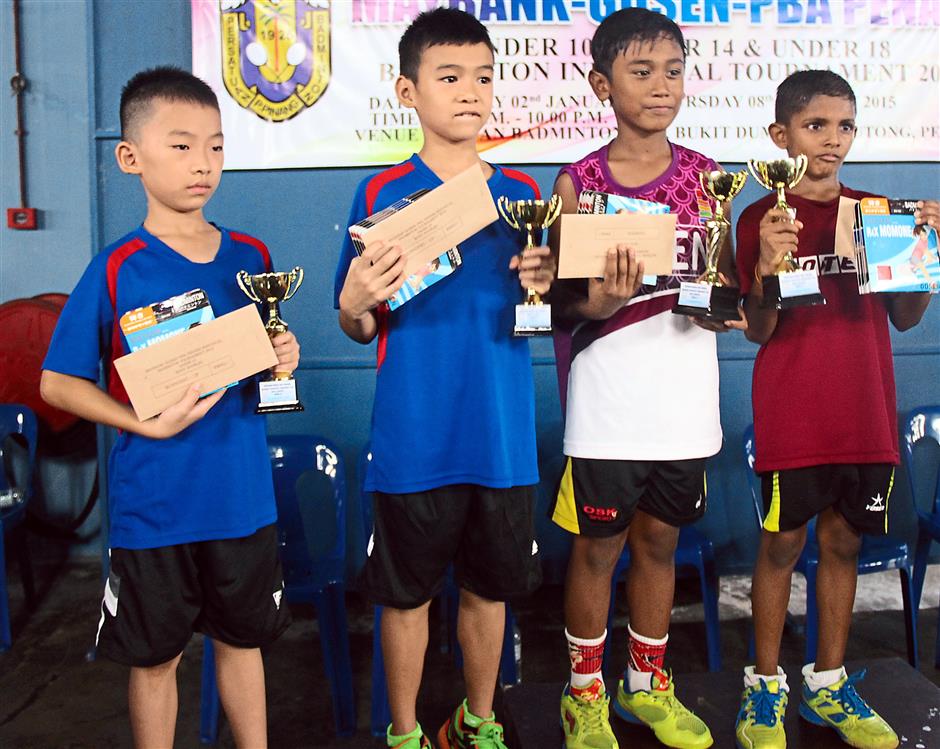 Little champs: (From right) The boy’s Under-10 doubles winners Tamilarasu and Zul Muis posing with runners-up Ee Wei and Ting Yong with their trophies and prize money.

He returned for the boys Under-18 doubles final with partner Harry Ang Kang Wen. But the duo found opponents Chng Choo Han and Ng Eng Cheong too hot to handle and lost 8-21, 21-18 and 11-21.

Penang BA’s Lee Shun Yang was the only one to achieve double joy.

In the boys Under-14 challenge, he gunned down Tan Yi Han, incidentally his doubles partner, 21-14, 21-15 to grab the singles crown.

Then the duo lived up to their top billing in the doubles to oust the second-seeded partnership of Goh You Ngee and Ong Yang Sheng 21-15, 21-18.