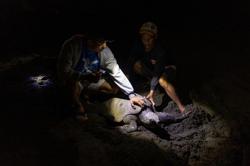 Nur Afifah (in blue headscarf) speaking to some of the volunteers during a beach clean-up activity in Pulau Sibu, Mersing.

THE Johor Fisheries Department is planning a major clean-up programme around the islands off Mersing in February once the monsoon season ends.

Sultan Iskandar Marine Park Resource Management and Protection chief Nur Afifah A. Rahman said the programme was part of the department’s effort to attract sea turtles to lay eggs on the island and beaches in Mersing.

“The mating season is usually between March and October, so we want to increase chances of sea turtles coming to our shores to lay eggs.

“To do this, we are planning a mass clean-up effort on beaches and islands surrounding Mersing so that it does not obstruct sea turtles from coming ashore,” she said when contacted.

Nur Afifah said the high tide would wash ashore debris onto the beaches at the end of the north-east monsoon season.

“So we need to act fast and start cleaning up the beaches in February so by March, we can see if our effort in attracting turtles is successful,” she said, adding that it was also in line with the department’s sea turtle conservation effort.

The department would also be conducting a clean-up on landing buoys surrounding the islands in Mersing, she added.

“These landing buoys are placed so that boats, especially those carrying visitors for island hopping activities, do not damage our reef when anchoring but are instead tied to the buoy,” she explained.

“Our clean-up work is pretty straightforward as we collaborate with other associations and government agencies to cover more areas in Mersing.

“It usually takes about two days to clean a 100m beach stretch,” he said, adding that the most commonly affected areas were in Pantai Mersing and Pantai Air Papan.

Nazirul shared that RCM’s clean-up programme would also start in February and continue until the next monsoon season.

“We usually wait for the monsoon season to be over because it consumes a lot of resources to carry out a clean-up programme at the same place every day.

“Rubbish collected is sent to the waste management services company,” he said, adding that the waste would also be separated and those that could not be recycled would then be sent to the landfill. 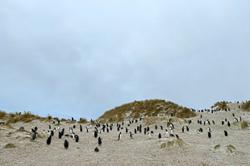