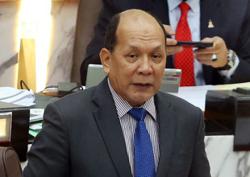 Dr Nor Fuad was sworn in at the MBSA town hall in Wisma MBSA at 9.30am yesterday before conveying plans for Shah Alam in his inaugural speech.

He said he would carry out his duties efficiently in serving the multiracial population in Shah Alam.

Dr Nor Fuad will focus on three core areas — materialising the vision for Shah Alam as a smart city, making it a liveable and a prosperous city.

“Four flood action plans were approved by the Selangor government to tackle issues under MBSA’s jurisdiction,” he said adding that the projects would cost RM14.64mil.

“A proposed upgrade of pump houses in Section 13 and Section U1, construction of pump houses in Persiaran Aman, Jalan Saksama 25/29 and Jalan Khidmat 25/35 as well as infrastructural works in Taman Sri Muda, Section 25 have been planned.”

He added that proposed repairs and upgrades on the sewerage system at Kampung Bukit Naga in Section 32 would also be carried out.

Dr Nor Fuad has served under several ministries including international trade and industries, entrepreneur development and cooperatives, plantation industries and commodities as well as the National Institute of Public Administration (Intan).

He previously served as Selangor’s deputy secretary (development) and since October 2019 was the state Economic Planning Unit (EPU) director until his appointment as Shah Alam mayor.

As EPU director, Dr Nor Fuad developed the First Selangor Plan (RS-1), a five-year development plan from 2021 to 2025 for the state.

The Selangor-born native, who holds a PhD in Economics, fills the post previously held by Datuk Zamani Ahmad Mansor.

On Oct 28, StarMetro reported Shah Alam deputy mayor Mohd Rashidi Ruslan as saying that Zamani Ahmad, who was appointed mayor in June 2021, was reassigned to Putrajaya as of Oct 8. 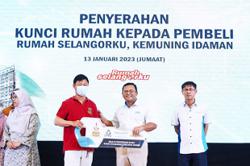