THE Sarawak government plans to spend RM2.3mil under its Budget 2023 to continue with the Forest Landscape Restoration (FLR) programme.

“RM19mil was approved under the 12th Malaysia Plan to implement this project with 35 million trees targeted to be planted within the next three years.

“As of August 2022, more than 14.45 million trees have been planted,” he said when tabling the state Budget 2023 at the Sarawak Legislative Assembly.

He said RM6.5mil was also proposed under next year’s budget for the conservation and protection of wildlife and Totally Protected Areas (TPAs), whereby 872,386ha had been gazetted as of last June, adding that the state targeted to reach one million hectares by 2025.

He added that three Projek Rakyat (people’s project) initiatives had been approved to enhance the management of TPAs and wildlife, namely the Bukit Lima Nature Reserve one-stop centre in Sibu, Piasau Nature Reserve Discovery Centre in Miri and publicity programmes for the Niah National Park to be listed as a Unesco World Heritage Site. — Bernama 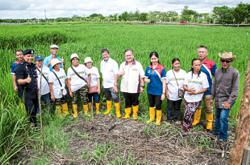