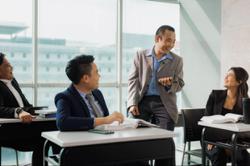 Wong (fourth from left) with his branch members at the mobile service centre in Sibu.

THE government has been urged to increase the number of public colleges and universities so that more students with good grades can gain admittance.

SUPP Dugong branch chairman Wong Ching Yong said several thousand students who got excellent grades did not get a place in public universities due to the limited slots available every year.

This, he said, was especially concerning as most students who applied to study in public universities came from disadvantaged families that had no other recourse to fund the children’s higher education.

“Private colleges and universities charge high tuition fees, and studying abroad is even more difficult unless they have scholarships,” he said when met at the branch’s mobile service centre.

For its population size of 34 million, Malaysia does not have enough public colleges and universities, he added.

“Take New Zealand for example; its population is only five million but there are eight universities and 16 polytechnics.

“Australia’s population is 26 million, but there are 43 universities.

“Malaysia has only about 20 public universities,” said Wong.

He said Malaysia should look at other countries’ examples in its effort to fashion itself as the hub for Asia-Pacific education.

He also urged for more transparency in the admission process to Malaysian institutions of higher education.

He said those who were rejected had the right for an explanation from the Higher Education Ministry.

He highlighted this following reports that 5,024 students with good grades failed to make it into public universities this year.