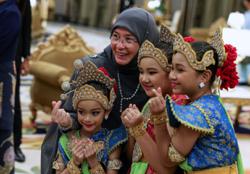 Tunku Azizah (left) having a discussion with representatives from Ankara Olgunlasma Enstitusu, an institute in Turkiye.

THE 8th Asean Traditional Textiles Symposium 2022 drew to a close after six successful days of sharing and appreciation for various woven items from Asean countries and its surrounding regions.

The biennial event was organised by Yayasan Tenun Pahang Diraja at Putrajaya Marriott Hotel in Sepang from Sept 25 to 30.

Over 300 textile artists, artisans and weavers took part in the event.

At the closing ceremony, Raja Permaisuri Agong Tunku Hajah Azizah Aminah Maimunah Iskandariah conveyed her gratitude to her team that had worked hard since May to organise the event.

She said the event was supposed to be held in Singapore but she had requested to host it instead.

“This was supposed to be held last year but was postponed due to uncertainties during the Covid-19 pandemic.

“So, when the Covid-19 movement restrictions eased up, the symposium was planned to be held in August but was pushed to September due to requests from Indonesian counterparts who would be celebrating their Independence Day.

“Today, we celebrate the success of this event,” she said.

“I am looking forward to going to Laos for the next Asean Traditional Textiles Symposium in 2024,” she said.

At the end of the ceremony, Tunku Azizah handed over the symposium flag to a representative from Laos, Duangmala Phommavong, as the host for the 9th Asean Traditional Textiles Symposium 2024.

Duangmala said she looked forward to hosting the event and welcomed all the artisans, delegates and dignitaries to her home country.