Ong is not keen to stay at the transit centre as he anticipates there will be restrictions.

HAYATI Ishak is looking forward to the day when she no longer has to sleep on the sidewalk every night.

The 56-year-old, who has been living at a bus stop in Jalan Kampung Kolam, George Town in Penang, hopes to stay at a welfare home as she can no longer work after undergoing a surgery.

“I used to live on the Penang mainland and worked as a cleaner.

“But because of my diabetes, I needed surgery.

“After that, my hands can no longer hold things for long and I am no longer able to work.

“I wish that I can work and fend for myself, but I cannot hold anything for long and am weak,” she said.

When told about the transit centre for the homeless in Jalan CY Choy, Hayati expressed her interest in staying there.

“I wish to have a roof over my head soon, instead of sleeping on the sidewalk.

“If there is space for someone like me, I am willing to go, even if it is a shared area.

“I have no issues with managing myself out here but having a safe and comfortable place to stay will be great,” she added.

While many of the homeless like Hayati are excited over the prospect of getting off the streets and into a shelter, there are some who have mixed feelings about staying in such centres.

“Life is tough, but I have grown comfortable living here (on the street).

“There is a public toilet nearby, which makes it convenient for me to go about my daily routine,” said K. Asokan, 67, a homeless man who stays at a bus stop.

Asokan, who sometimes works as a trishaw rider, said he did not have any family members and did odd jobs over the years.

“I prefer to live at the bus stop because of my memory issues.

“It has been a problem since I was young.

“As it is difficult for me to stay with anyone, I have chosen to live here,” he said.

Asked if he would be willing to stay at the transit centre for the homeless, Asokan said he did not want to share space with others.

“If I have to share a space, I will not be able to handle it.

“I do not think that I can stay with a group of people.

“I am not sure how I will be able to handle being around so many people as I am not used to it.

“So far, no one has asked me to leave this place, so I will remain here.

“It is convenient as there is always food here,” he added.

Another man, who wished to be known only as Ong, said he had been homeless for over three decades.

The 68-year-old prefers to stay put in the George Town area.

“Here, we can go about our day with no restrictions and we do not have to work or do anything if we are not up to it.

“If there is a place for all of us to stay, it would be nice but we will probably have to work and there are days I do not want to do anything.

“It would be great to have three meals a day but I am sure the centre comes with restrictions,” he said.

Ong said he left his family home many years ago because of a misunderstanding.

“I wanted freedom and to just be with my friends.

“Here, we do odd jobs like helping people move homes or pack things.

“If there is a need and people call me, I will help them.

“We all have various odd jobs but it is not daily.

“Usually, it is my friends asking me for help and we all earn some money together,” he added.

Ong said he moved around the island but always returned to the Komtar area.

“It is more convenient to stay at the Komtar bus station.

“Here, people come to deliver food to us and we can always walk to different places nearby where there is free food being handed out,” he said.

Ang Siew Bok, 52, who used to work in Singapore before moving to Penang to find work, said he had been homeless for a while now.

“I am from Perak but moved to Singapore to work many years ago.

“Then, I moved here for work and was supposed to stay with a friend, but I did not want to trouble anyone.

“I decided that since the job did not work out for me, I will just stay here and seek out other opportunities,” he said.

Ang said he had heard about the transit centre but was not keen on staying there.

“I have been approached before and as much as the centre sounds nice, I do not want to stay there.

“It is not a permanent home where I can be comfortable.

“They will eventually ask us to move out and it will be back to square one for me,” he said. 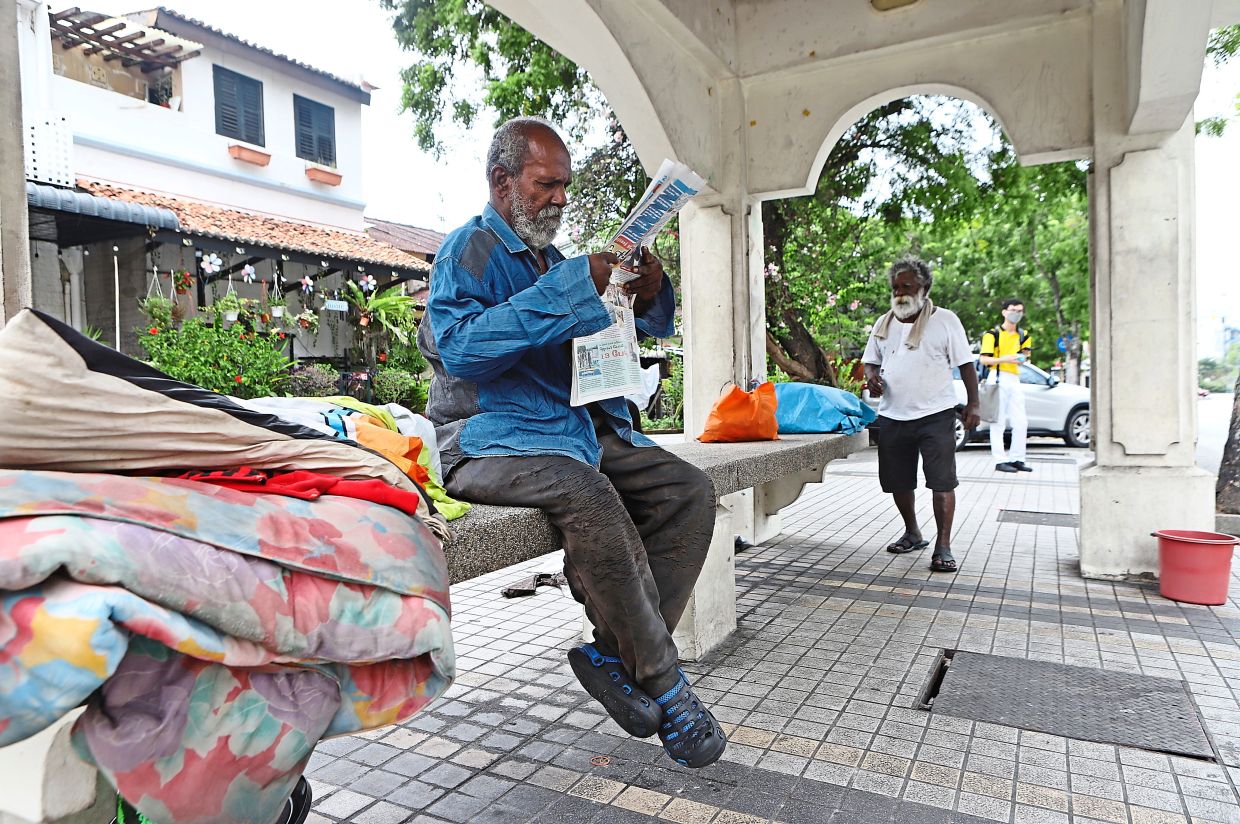 Ong is not keen to stay at the transit centre as he anticipates there will be restrictions.

Asokan (seated), at his regular spot at a bus stop along Jalan Kampung Kolam, is not keen to stay at the transit centre.