IT IS hoped that the new line-up of councillors for Pasir Gudang will bring the city to greater heights with fresh ideas that benefit the people, says Datuk Asman Shah Abd Rahman.

The Pasir Gudang mayor said each appointed councillor had been selected based on their expertise, experience and background.

It is important for the councillors to connect the people to the Pasir Gudang City Council (MBPG), he stressed.

“We do not want councillors who are dormant and do not contribute ideas or visions that can improve our services,” he said after the swearing-in of the councillors at Menara Aqabah.

The new line-up comprises members of Barisan Nasional component parties, namely 13 from Umno, eight from MCA and three from MIC.

“A councillor should be a spokesperson for the local council, the point of reference for people’s issues and someone the public can depend on,” said Asman Shah.

He said direct engagement with the people on a day-to-day basis was important as this could help in giving them direct information on current developments and feedback on policies.

“This will eradicate all confusion about services provided by the government and the local council,” he said.

Asman Shah also said that MBPG would focus on achieving low-carbon and smart city status by 2025, starting this year.

“To get there, the city council has prepared the MBPG Strategic Plan and Pasir Gudang District Plan 2025 in our effort to provide the best service to the people.

“MBPG has also finished its Pasir Gudang Local Plan (RTPG) 2030, so there is a lot that we need to focus on together,” he said, adding that the local council would also focus on environmental protection.

Meanwhile, councillor Noor Azleen Ambros said each councillor played an important role in helping the government achieve its objectives for economic recovery and to improve standard of living.

Councillor S. Mahendran said his focus would be on improving roads in the city, especially those close to schools and industrial areas.

“We want to see how we can improve the day-to-day commute in Pasir Gudang, especially during peak hours.

“There are ongoing housing projects, such as in Bestari Perdana, that need proper planning and insight so we can ensure sustainable development,” he added.

First-time councillor Low Sing Huat intends to fight for the welfare of the urban poor in the city.

“With the rising cost of living, the council can play a more proactive role to address this matter,” he said. 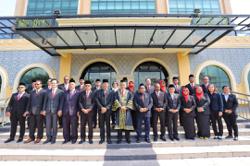