(From left) SWCorp deputy CEO Nik Noraini Nik Ya, Yatela, Abdullah Izhar, Zawiyah and Chang at the official presentation of sponsorship during the launch of TLFP’s Surplus Food Rescue Programme.

The sponsorship started in October last year and will run until September 2024.

The NGO also received a five-tonne truck as part of the sponsorship, allowing for the collection of more surplus food to bolster its food bank.

The Surplus Food Rescue Programme is supported by Sime Darby Property Bhd as one of the foundation’s donors.

The programme, which was launched at the Kerinchi People’s Housing Project (PPR) in Kuala Lumpur, saw some four tonnes of rescued produce distributed to 500 families. “It falls under the community, health and environment pillars of YSD, which aims to address the well-being and health of the marginalised and underprivileged.

“The programme also has the additional benefit of reducing greenhouse gas emissions as less food waste will be sent to landfills, which is part of YSD’s efforts to contribute to climate change action,” she said.

Yatela added that Sime Darby Property, on its part, had sent staff volunteers to provide assistance.

Yatela said more than 560 tonnes of surplus fresh food – equivalent to over 1.6 million servings – had been collected since the start of the sponsorship, benefitting some 18,000 families and residents of 83 charitable organisations.

Meanwhile, Abdullah Izhar said food security and safety was an increasingly important issue and the programme would be helpful to those in need.

“I hope the programme can be expanded and improved by not only providing nutritious food, but also educating the community on healthy eating habits.

“We plan to organise more programmes in the future to ensure that no family is left behind,” he said.

Besides surplus produce, dry goods and personal hygiene items were also distributed to PPR Kerinchi families during the event.

Housewife Nor Faziliaton Zahirudin, 37, said the programme had helped to ease her family’s financial burden.

“I have three school-going children and only my husband is working.

“It’s very hard to manage the household in the current economic situation, so such programmes are helpful to my family,” she said.

Another resident, who only wanted to be known as Bavani, 43, also welcomed the food aid as prices of goods have increased.

“With programmes like this, we can manage our lives a little better,” she said. 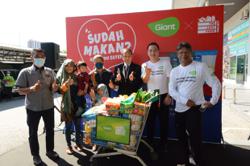