By MEGAT SYAHAR and AIDA AHMAD It showcased British culture including a selection of UK hit songs spanning the 70 years of Queen Elizabeth II’s reign as well as performances by the Great British Circus.

A video paying tribute to the Queen was also played.

More than 800 guests attended the reception including Malaysian royalty, senior representatives from ministries, members of the diplomatic corps and business community.

They enjoyed British and Malaysian food served on the verandah in a street party setting.

The event kicked off with a toast to the good health of the British monarch.

Hay then paid tribute to the Queen who is the second-longest serving monarch in history.

“The most important facet of Her Majesty’s reign is her sense of duty and tireless devotion to service.

“She is patron of nearly 600 charities and organisations.

“She has carried out more than 21,000 engagements and hosted 112 state visits to the UK.

“Those who saw the video clip of the Queen having tea with Paddington Bear will also know that she has a brilliant sense of humour and excellent comic timing,” said Hay.

He also spoke about the close relationship and shared history between the British and Malay-sian governments.

A guest, AssetData.io founder Andrew Diamond said Queen Elizabeth II’s dedication to the United Kingdom and the Commonwealth was unparalleled.

“For 70 years, she has put personal considerations second to performing her duties.

“Only now at 96 has she started to slow down when most people would have retired long ago,” he added.

In Malaysia, other events marking Queen Elizabeth II’s reign included the lighting of the Queen’s Platinum Jubilee Beacon by Rotary Malaysia District 3300 and a charity golf day by the British Malaysian Society.

Members of the British armed forces based at the Butterworth airbase in Penang held a garden party with staff and families from the Five Power Defence Arrange-ments member nations.

The reception by the British High Commission was the culmination of the jubilee celebrations. 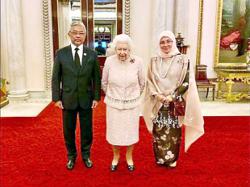