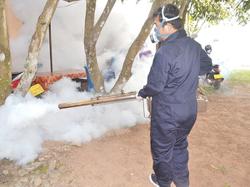 THE rise in dengue numbers can be attributed to people being out and about compared to the Covid-19 restriction period when they were housebound, a health expert says.

“Dengue has infected 10,927 people in Selangor and there are three deaths between January and May 21.

“More than 500 cases per week have been recorded. “Out of the nine districts, Petaling topped the list with 4,102 cases.

“The figures are worrying,” she said.

There were 6,006 dengue cases with one death in the corresponding period last year.

Dr Siti Mariah said the likelihood of people getting infected was higher as they were now dining out.

“The Aedes Aegypti mosquito, the main vector of dengue, is known to bite in the day.

“It peaks at dawn and in the evenings,” she said.

She pointed out the efforts made to curb the spread of the Covid-19 virus through various restrictions including closing schools, district borders, places of worship, restriction on travel and dining out.

“We did so much to stop the spread of Covid-19.

“We can work together to fight dengue which is a public health threat,” she stressed.

She said all local councils were told to ensure that public spaces were kept clean.

“We want all local councils to mobilise their anti-dengue squad throughout neighbourhoods, conduct house-to-house checks while reminding residents to spend 10 minutes a week to check and rid of stagnant water to eliminate mosquito breeding sites,” said Dr Siti Mariah.

“Because of the unbearable pain, the term breakbone fever is also used to describe dengue fever,” she added.

Klang Municipal Council Health Department director Azmi Muji said everyone had a role to play in the fight against dengue.

“Use a mosquito repellent to protect against mosquito bites.

“We advise people to spray insecticide under sofas, tables, shelves or in dark parts of the kitchen as mosquitoes hide in these areas,” he said.