Extending love to the needy on Chinese Valentine’s Day

SOME 50 homeless and underprivileged people were treated to a Chinese Valentine’s Day meal at the “octopus” pedestrian bridge near Komtar Walk in George Town, Penang.

“Love is not only for your parents, wife or girlfriend but should be shown to the homeless and poor as they also deserve to be loved by us,” he told reporters during the event on May 20.

The day is deemed special because “520” (wu er ling) rhymes with the phrase “I love you” in Mandarin.

Cheah said he decided to hold the event near Komtar because there were many homeless people in the area.

During the event, the homeless were given a pack of rice, chicken, pizza and soft drinks each.

“We gave more food to some because we knew they were going to share it with their family members who could not attend,” he said.

Cheah suggested providing better facilities for the homeless, such as hot showers.

“They have a right to live as they choose and need support from the community.

“We should not let them feel as though they are in prison by placing them in old folks homes or homeless centres.

“We should respect their lifestyle choices,” he added.

Cheah said that MCA would try to assist the poor, and in the future if the party were to be given a chance to form the state government, it would also help local small and medium industries improve their financial standing. – By IMRAN HILMY 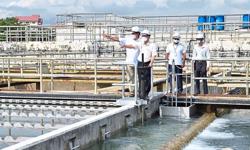