THE Kuala Lumpur Drainage and Irrigation Department (DID) has denied that it sold flood retention ponds situated on government land.

Its deputy director Ratna Rajah Sivapiragasam said even if the land where the retention ponds were situated in had been sold, the ponds themselves remained under the purview of the department. Ratna says there are 15 flood retention ponds in Kuala Lumpur.

He was commenting on the allegations made by several MPs who claimed that six flood retention ponds in the city had been approved for developement.

Ratna said the MPs should have sought clarification with the department first before making the allegations.

On Saturday, several KL MPs had also lodged police reports to investigate possible abuse of power over the sale of the ponds.

DID director-general Datuk Dr Md Nasir Md Noh, when contacted, said that land alienation did not mean that the retention ponds need to be surrendered.

“The ponds, and the area surrounding, will be upgraded with walking paths and has to be surrendered back to the government after the project is completed.

“If we sell the ponds then the entire Kuala Lumpur will be flooded,’’ he said.

Ratna explained that the land where the six ponds sit have been approved for transfer of ownership by the Department of Director General of Lands and Mines Federal Territories (PPTGWP) to four companies for residential and mixed development.

“While the land has been sold, the developers will not be allowed to touch the ponds or compromise its storage capacity,’’ he told StarMetro.

He elaborated that the ponds had to be functional and properly maintained, and that the DID will not allow any tampering that may compromise the pond’s storage facility.

“They (developer) will have to upgrade the area and maintain the land surrounding the ponds.

“We built flood mitigation ponds to counter floods, and these pieces of land are located on former mining ponds. Once it is functional, we will gazette it, but this takes time.

“But there are people who are eyeing this land for development and they will approach the government.

“This is when the matter goes to the Federal Territory Land Executive Committee which is chaired by the Chief Secretary to the Government Tan Sri Mohd Zuki Ali,’’ he said.

Ratna added that if the committee did not receive any objection to the development proposal, the government and PPTGWP will proceed with the alienation process.

He said DID and Kuala Lumpur City Hall (DBKL) would object if they felt that the development would compromise the retention pond’s storage capacity.

“The Taman Desa Flood retention pond was alienated to one company and the DID and DBKL put in a condition for the developer to guarantee that by developing the land, they must prove that it will not reduce the capacity of the pond.

“They (company) could not guarantee it and the Chief Secretary cancelled the alienation process.

“The government might have to pay interest on the premium paid due to the cancellation of the alienation,’’ he said.

“While ideally we would all like to see the land with the retention ponds not developed at all, we have to look at the overall economic factor and the need to build affordable homes,’’ he said.

Overall, Ratna added that Kuala Lumpur was the least affected by the Dec 18 weekend flood as all the flood retention ponds were fully functional and operating at optimum level.

There are 15 flood retention ponds in Kuala Lumpur that were built to counter floods.

He said DID’s Kuala Lumpur Flood Mitigation (KLFM) plan, which is a control-at-source approach whereby excess water is diverted to flood mitigation ponds, did its job.

The stored water in the ponds is then gradually released back into the rivers when the situation improves. This prevents excess water from flowing into the city during a downpour which can lead to floods.

“Our flood mitigation system had a certain protection level and it worked well, however the evacuation and rescue efforts for people could have been better coordinated,’’ he added. 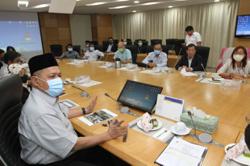