THE tender to build an integrated solid waste management centre (ISWMC) in Tanjung Dua Belas is still at the preparation stage and a contractor is expected to be appointed by the second quarter of 2022.

“A contractor has not been appointed at this point, as the tender documents are in the process of being prepared by a consultant,” said Selangor local government, public transportation and new village development committee chairman Ng Sze Han, in response to a question from Lau Weng San (PH-Banting) at the Selangor state assembly sitting in Shah Alam.

Lau had asked for the tender, contractor and operational details of the ISWMC, which will be built in Kuala Langat.

“The WTE is the main component and its method of operation is to dispose of solid waste by incineration, which in turn produces electrical energy.

“Ash produced from the incineration of solid waste will be used as a daily cover for the sanitary landfill, while incineration emissions will be treated before being released.

“The incineration methods and treatments used are in compliance with international standards,” he added.

Daily cover refers to the soil material that is used to cover compacted solid waste in a sanitary landfill.

He said organic waste would be crushed into smaller pieces before being incorporated into the anaerobic digester system.

“Organic waste will then undergo a fermentation process to produce renewable energy.

“Under the composting component, organic waste will be decomposed by microorganisms in an oxygenated state to produce fertilisers,” he elaborated.

To a supplementary question by Saari Sungib (PH-Hulu Kelang) on the ISWMC’s benefits, Ng said the method was environmentally-friendly, modern and helped extend the life of landfills. 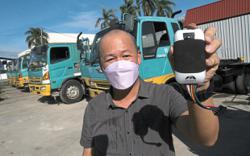