‘Proposed enforcement of ruling on sale of beer unfair’

By AIDA AHMAD and JAROD LIM Coffee shop associations have urged the government to reconsider imposing the ruling of enforcing a beer licence application to sell beer and stout as it would be a heavy financial burden on them.

Its public relations officer Raymond Cheow told StarMetro that depending on the location of coffeeshops, beer was often not a sellable beverage.

“Beer sales at coffeeshops is mainly to help owners subsidise the cost of running the business.

“It is mainly the older generation who order beer when they dine in at dinnertime.

“No one drinks alcohol during breakfast or lunch.

“Younger customers at coffeeshops don’t order beer because they drink alcohol in pubs.

“Coffeeshops don’t sell hard liquor, so why the need to enforce this ruling now?” he asked.

Cheow said the government should reconsider as coffeeshops contributed to the economy and the new ruling would put a strain on the business.

“It is really a heavy burden for coffeeshop owners to pay for the beer licence,” he stressed.

An online portal had reported that the Customs Department had issued two circulars in June and August to all its division heads, state-level directors and various local authorities, including Kuala Lumpur City Hall (DBKL), to enforce licences for beer in all restaurants and coffeeshops as of Jan 1 next year.

Meanwhile, Malaysia Singapore Coffee Shop Proprietor General Association president Wong Teu Hoon said coffeeshops nationwide would be hit with a double whammy if operators were required to apply for a licence for the sale of beer and stout.

“This is on top of them having to increase the prices of beverages in tandem with the rising cost of raw ingredients.”

He said the association’s members were upset at the ruling as it would place a heavy burden on coffeeshop operators.

“The licence for the sale of beer and stout has been exempted since 1994 and removing the exemption next year would negatively impact operators.

“Beer and stout were sold as side drinks and sales of these alcoholic beverages contributed very little profits to operators.

“Once this new licence requirement is enforced, the sales of beer and stout will not cover the cost of the licence,” he said.

The association had written to the Finance Ministry in September to highlight their plight and urged the ministry to withdraw the proposed enforcement of the ruling.

In their appeal letter sighted by StarMetro, the association said coffeeshops were expected to bear the additional cost, licence fee and processing fee as well as security deposit which could add up to RM7,000 yearly.

In its letter, the association had pointed out that the alcohol content in beer and stout was less than 5%.

“Currently, we do not have much information from the authorities about the ruling, but we will continue to appeal to the relevant agencies.

“Hopefully, the government will withdraw it, as coffeeshop operators are still recovering from the effects of the Covid-19 pandemic,” said Wong. — By AIDA AHMAD and JAROD LIM 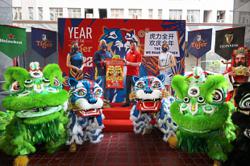