KOREAN culture fans were treated to free screenings of three films as part of the K-Culture Festival that ran from Dec 1 to 5.

The Republic of Korea Ambassador to Malaysia Lee Chi-beom launched the event.

He said the K-Culture Festival 2021 was organised by the embassy in appreciation of Malaysians’ support and passion for Korean culture.

“Despite the Covid-19 pandemic, people are keeping a positive mindset.

“Our Korean culture is enjoyed throughout the world. And Malaysia was one of the first nations to embrace the Korean cultural wave.

“Our aim to screen the three Korean movies: Minari, Seobok and The Hypnosis for free is to make the festival more lively.

“Minari has been successful in grabbing the attention of people overseas while Seobok and The Hypnosis highlight the originality of Korean cultural arts,” he said.

The drama chronicles the hardships faced by a Korean immigrant family who moves to rural Arkansas, US, in pursuit of the American Dream. Back in South Korea, the film drew over a million viewers.

Also screened at Golden Screen Cinemas (GSC) Mid Valley in Kuala Lumpur as part of the festival was the South Korean blockbuster Seobok, a futuristic action-thriller that sees a terminally ill former intelligence officer tasked with transporting the first human clone while the US military tries to intercept it.

The Hypnosis is a psychological thriller about a college student who has unidentified memories surfacing after waking from hypnosis.

“Seobok and Hypnosis are movies of different genres that showcase the originality and artistry of the Korean entertainment industry,” said Lee, who was accompanied by his wife, Ha Seong Hee. 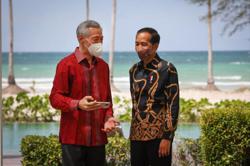