Residents of SS14, Subang Jaya in Selangor, are always on the lookout for those who need help.

Their most recent project was a donation of disinfectant (500 litres) and portable spray equipment (three packs of 16 litres) to Hospital Tengku Ampuan Rahimah in Klang.

“We welcome contributions in cash and kind.

“Even children as young as six donated their pocket money.

“Aeon Big Subang Jaya had also supported us a few times by providing drinking water and food items to frontliners.

“We also want to thank StarMetro for supporting our community programmes over the years and encouraging others to help,” he added.The SS14 Subang Jaya Community Action Group comprises volunteers who are actively involved in helping society.

During the movement control order period, they distributed food to frontliners — such as the police manning roadblocks as well as fire and rescue department officers.

The team had also reached out to frontliners in Subang Jaya, USJ and Putra Heights.

They also collected food from restaurants for people who could not work as their jobs were classified as non-essential. 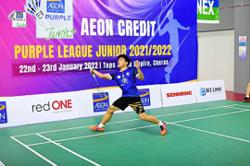