Residents of aman Berkeley want the Klang Municipal Council to preserve the field that is the only green recreational area in the neighbourhood. - Photos/ ISRAFIQ ALIAS

SOME six weeks have passed since the Save Berkeley Field Pro-tem Committee officially opposed Klang Municipal Council’s (MPK) controversial plan to turn a field into an open-air carpark and a futsal court.

Taman Berkeley residents are peeved as MPK seems to be dragging its feet in responding to the Save Berkeley Field petition that garnered 623 signatures against the proposed development of the 0.95ha recreational field.

Sobey said, “We are seeing sluggishness from the council’s Planning Department.

“An employee, Zainuddin Sidek, called on Oct 12 to obtain the correspondence address to facilitate a reply. But up till now, the committee has not received an answer,” she said.

Sobey said since Oct 12, she made two calls to Zainuddin and volunteered to collect any written reply from the Urban Planning Department’s office.

“But I was told it would be posted.

“The committee feels that MPK is not customer-centric.

“We want MPK president Ahmad Fadzli Ahmad Tajuddin to step in and assure the residents that MPK will gazette the green field to protect environmental damage, in line with Local Agenda 21,” she said.

Local Agenda 21 is a local government-led, community-wide participatory effort to establish comprehensive action for environmental protection and community well-being in a local area.

MPK’s Planning Department had proposed an 85m x 59m carpark for 100 cars and 30m x 20m futsal court in place of the field.

Taman Berkeley residents objected to the project as it would deprive them of a green space for exercise and their general well-being.

Klang Perikatan Nasional service centre community coordinator Nallan Dhanabalan, on Oct 4, had a closed door meeting on the issue with Ahmad Fadzli, stating their objections against the proposed project. 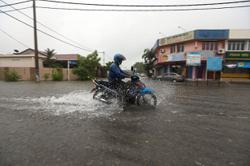