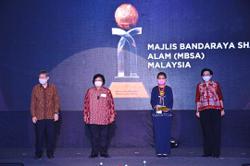 SHAH Alam City Council (MBSA) has once again been recognised for its sustainable development efforts by the Asean Working Group for Environmentally Sustainable Cities (AWGESC).

The city council won its fifth Environmentally Sustainable Cities (ESC) Award and fourth certificate of recognition from AWGESC, that was hosted by Indonesia through a virtual ceremony.

“The implementation of Local Agenda 21 since July 2000 has seen significant changes in MBSA’s city planning and development,” its Corporate and Public Relations Division head Shahrin Ahmad said in a statement.

“Projects and programmes are also planned in line with the United Nations’ Sustainable Development Goals (SDGs), of which MBSA has identified 17 goals and 169 targets to achieve by 2030.”

He said the experience gained in preparing the Shah Alam Voluntary Local Review special report on SDGs at the United Nations High-Level Political Forum in July, served to help in the reporting process for the 2030 Agenda Implementation Progress in Malaysia.

“The Environment and Water Ministry (Kasa), which serves as Malaysia’s focal point for Asean Senior Officials on the Environment and AWGESC, had nominated Shah Alam for the ESC Award and certificate of recognition under the Clean Air, Clean Water and Clean Land category,” said Shahrin.

“The nomination process was done in collaboration with the Housing and Local Government Ministry (KPKT).

“The basic criteria to select candidates among the cities in Malaysia involved indicators used in the star rating system for local councils and Malaysian Urban Rural National Indicators Network for Sustainable Development, under KPKT and PLANMalaysia.”

In addition, he said the Low Carbon City Challenge 2030 implemented by Malaysian Green Technology and Climate Change Centre, an agency under Kasa, was also taken into account for the nomination.

“Asean has embarked on this programme since 2008 to drive, benchmarking and recognise efforts related to environmental sustainability.

“The nominated cities are also able to share their local best practices in ensuring their cities are clean, green and liveable,” he added.