A SINKHOLE opened up on Jalan Awan Jawa in Taman Yarl Kuala Lumpur late Friday (Nov 12) afternoon and had progressively gotten bigger and bigger the following morning forcing the temporary closure of the road by Kuala Lumpur City Hall (DBKL).

The sinkhole which is located at a dead-end road has been partially cordoned off as it is estimated to be about three to four metres deep.

A DBKL officer from the Public Works and Drainage department, Mohd Fadzlil Abu Zarin said from a preliminary investigation at the site it was discovered that the sinkhole was caused by a pipe leakage.

“Something was leaking underground and we did not know if it was caused by a leaking Air Selangor pipe or an IWK pipe until it was dug up, but it was eventually confirmed that it was an IWK pipe that was affected.

“We saw sewage waste at the site and have notified IWK and they will be handling the matter from now on,’’ Mohd Fadzlil said.

When Star Metro visited the site, IWK workers were already at the site and were awaiting the machinery required to excavate the hole.

An IWK worker at the site said the pipe was located about five metres deep.

Resident Jagdev Singh living nearby said the hole had first appeared at about 1.30pm and by late evening it had already gotten big.

“We are worried because if the area was not closed up, unsuspecting motorists could easily fall into it,’’ he said, adding that he hoped the authorities would repair the sinkhole as soon as possible. 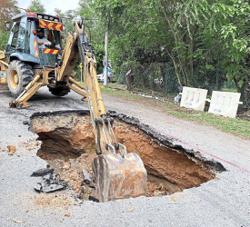