NOT wanting to be idle during the Covid-19 pandemic, a law student started an online business offering custom-built computers.

K. Kavindra Kanna, 21, had planned to continue the third and final year of his studies in the UK last year but decided to remain in Malaysia due to the pandemic.

“I found myself with a lot of time on my hands as I was only following classes online, so I read up on how to run a business.

“Then with RM2,000 of my own money, I started The Banana Gaming Empire in July last year to offer custom-built IT products and services.

“I have always been interested in IT and I realise there are not many such services in Johor Baru, compared to the Klang Valley,” he said when met at his retail outlet in Taman Mount Austin, Johor Baru.

Initially, Kavindra operated from home and built the computers at his father’s construction company’s office.

Because of that, convincing customers that he was running a legitimate business became a challenge.

“It was tough at first as I was a one-man show, from promoting the business and handling orders to assembling the computers and doing tasks related to customer service, while continuing with my studies at the same time.

“The response I received allowed me to save enough money to open a retail outlet in March this year.

“I now have a full-time employee besides several part-time and freelance workers,” he added.

Kavindra said each computer was unique as it was based on a customer’s preference, budget and usage, and could range in cost from RM1,500 to more than RM30,000.

His customers include traders, gamers, corporate offices as well as parents looking to equip their children for online classes.

“During the pandemic, more people were working from home and wanted to set up proper workstations in their house.”

Kavindra will be graduating in December and plans to pursue a career in the legal profession while continuing with his custom-built computer business. 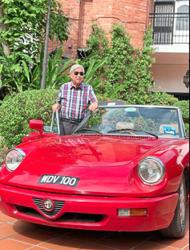