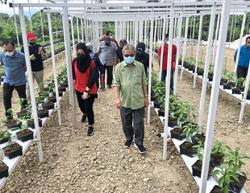 Rumaizi during a visit to the urban farm at the premises of the Tun Razak Library in Ipoh.

THOSE in residential areas who want to set up an urban farm or community garden should first engage with their neighbours and other residents.

Ipoh city councillor Dr Richard Ng said it was important to have prior discussions with the neighbours to avoid any untoward incidents or disagreements.

“There are many things to consider, be it a community garden project or urban farming.

“There was an incident where a resident in Tambun had set up a farm and planted some papaya trees but the trees were chopped down by certain residents who objected to the project,” he said during a virtual talk on urban and community farming on social media.

“Based on my experience, it is important to reach out to as many residents as possible and discuss any matter before proceeding with it,” he advised.

Dr Ng said he had also reached out and encouraged village chiefs, neighbourhood associations and community groups to be involved.

Ipoh mayor Datuk Rumaizi Baharin had last month announced that those interested in farming projects could submit their applications to the city council’s Town Planning Department.

The Urban Community Farming Policy — a guideline to regulate urban farming in the country — was launched in August by former Housing and Local Government minister Datuk Zuraida Kamaruddin.

Dr Ng said setting up a farming project was not easy and advised those interested to seek the advice of an expert to assist them.

“Those who are growing vegetables must be patient as it takes up to one month before they can see results,” he said.

“After harvesting the crop, they have to think about the next step.

“A farm must be sustainable and should be enjoyed by everyone.

“It is not a one-time project and needs long-term commitment,” he added.

He said 12 were for community garden and six for urban farm projects.

“With the guidelines provided by MBI, we hope to see more people in the city taking an interest in setting up community gardens.“Not only will it allow the community to have a good supply of fresh vegetables, it also encourages bonding among residents,” he added. Rumaizi during a visit to the urban farm at the premises of the Tun Razak Library in Ipoh.