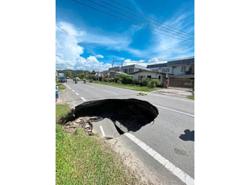 REPAIR works are currently underway on Jalan Sri Hartamas 1 after a sinkhole caused a portion of the road to be closed to traffic on Wednesday (Oct 20) evening.

Kuala Lumpur City Hall (DBKL) Project Implementation executive director Datuk Azmi Abdul Hamid said the relevant departments were at the site to also investigate the cause of the sinkhole.

He said preliminary reports suggested that a burst water pipe underground caused the sinkhole, resulting in the closure of both sides of the road.

“Mitigation works are currently being carried out at the site. However, we do not know when it can be reopened safely. We are also investigating the cause of the burst pipe,” he said, when contacted.

Authorities were forced to close both sides of the road near the Home Ministry offices along Jalan Sri Hartamas 1 following the appearance of the sinkhole.

This is the second such incident at the same location after the first one occurred on July 20 last year.

At the time, an approximately 4m wide sinkhole appeared and was patched up.