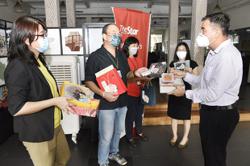 (Top row, from left) Soon and Dr Gwee interacting with the participants of the Live Streaming Star Championship 2021.

A TOTAL of 18 participants battled it out during the final of the Live Streaming Star Championship 2021 which was held to encourage more youths to take up public speaking.

“I wrote the draft for my speech more than a year ago.

“The competition was supposed to be held with finalists face to face but was postponed because of the pandemic.

“Hence, I had more time to refine my speech and edit my final draft,” she said.

The topic she chose to speak on was about whether people were becoming less social because of social media.

“I found this topic interesting as people often highlight the negative aspects of socialising through social media and only a few speak on the positive ones.

“I wanted to highlight that social media also has positive social effects if correctly utilised,” said the USM School of Management undergraduate.

First runner-up Tan Kah Wei, 23, did not expect to come in second as she thought she had not performed well.

“I started writing my script only three days before the competition.

“My topic was about the importance of outshining yourself nowadays.

“I shared my personal opinions and experience.

“While I was drafting the script, it acted as a reminder for me to work hard in order to achieve my goals,” said the USM undergraduate.

Second runner-up Teoh Swee Ming, 21, said she felt happy as it was her first time participating in a public speaking competition.

“It was a good experience for me.

“It took me around two weeks to write my speech and practise the flow.”

Teoh, who is also an under- graduate from USM, said she wanted youths to understand the importance of outshining themselves and hence, chose to speak on the topic as well.

Meanwhile, Penang youth and sports committee chairman Soon Lip Chee said the championship was an initiative by the state under the Young Digital Talent Platform which aimed to match talents and employers, thus creating a win-win solution for both, while adopting to the new norm.

“It is vital to maintain the livelihood of our people, especially the youths, to ensure that all of us can survive at the end of the day.

“The programme serves as a mechanism to nurture skills among the youths so they can subsequently be hired,” he said in his speech.

“I hope that more youths will become aware of the need to further develop their soft skills as well as hard skills to become successful.

“Having good communication skills will help our youths outshine others and give them a great advantage in the competitive job market,” she said. 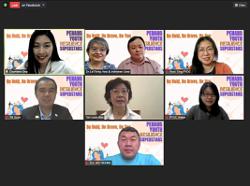