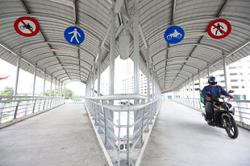 (From left) Residents Mohd Arif, Razali and Subariah Husin showing the sewage that now ends up in the surrounding drainage.

RESIDENTS of several blocks of flats in Bandar Puncak Alam are feeling uneasy about a stench that is permeating the area.

They blame it on overflowed sewage from a drain near the parking lot.

Those residing in Flat Saujana Mawar believe the muck — which began appearing behind Block E eight months ago — is leaking from the underground sewerage system.

They urge the authorities to step in and resolve the problem, which has raised hygiene and health concerns in the neighbourhood.

“The stench gets even worse after downpours,” said the retiree, who bought his unit in 2010.

Another resident Mohd Arif Mat, 48, suspected objects in the sewerage pipes blocked the flow of sewage.

He said this has caused a backflow into the toilets inside the residents’ units.

“As a result, some residents have installed a pipe to divert the waste from their toilet into the surrounding drainage system,” he said.

This has caused another problem as the sewage now clogs up the drainage, causing the water to stagnate.

Razali said residents had no choice but to instal the additional pipes to prevent wastewater from gushing out of their toilets.

“Because of this, we have had to go over to petrol stations or nearby supermarkets to use their toilets,” he added.

Resident Mohd Shamsul Helmi, 38, said the walls in his units would sometimes become damp, perhaps due to the backflow.

A notice displayed in a common area by the joint management body (JMB) said six clean-ups of the sewerage system had been conducted since late 2017.

It warned residents not to throw items into the toilet bowl, adding that sanitary pads and undergarments were among items commonly found clogging the sewerage system.

He said the council had forwarded the issue at the flats to its JMB, after receiving several complaints from residents.

“But the JMB does not have sufficient funds to service the sewerage, due to the poor collection of maintenance fees.

“There are also many empty units there that has further affected fee collection,” he said, adding that only 30% of residents have paid the maintenance fee.

The flats in Taman Alam Jaya comprised six blocks of five-storey buildings, each having between 60 and 70 units.

Residents also expressed concern about the overgrown grass in the area, fearing snakes among other creatures. 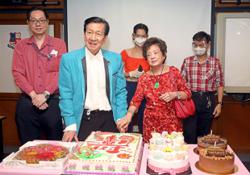 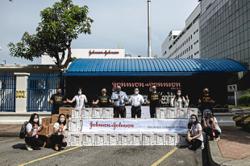