Reezal (right) on a working visit to Seberang Prai in Butterworth. With him are Rozali (white cap), Jagdeep (front, left) and Yew (in purple, far left). – Bernama

PENANG will stand to benefit from two People’s Housing Project (PPR) flats under the 12th Malaysia Plan, mooted by the Housing and Local Government Ministry.

Its minister Datuk Seri Reezal Merican Naina Merican said one will be built on the mainland and the other on the island.

“As about 45% of B40 families in Penang are from central and north Seberang Prai districts, it is important to have one built on the mainland.

“We have committed ourselves to having two PPR flats built.

“The last PPR project by the ministry in Penang was Tok Suboh PPR in Bukit Minyak, Simpang Ampat, under the rent-to-own concept,” he told a press conference during a working visit to Seberang Prai City Council (MBSP) in Butterworth recently.

Reezal said the state government had proposed five locations, all of which will be studied before the exact locations are finalised.

“Under the 12th Malaysia Plan, we want to increase the number of PPRs, affordable housing units, maintenance works and other relevant facilities to give the best to the people,” he said.

State housing committee chairman Jagdeep Singh Deo, who was present at the press conference, expressed appreciation for the Federal initiative and added that public housing needs should not be a political matter.

“We cannot afford to politicise these matters as it is a basic need for families to have a roof over their heads.

“As representatives from Federal and state governments, we must continue to do our best for Penangites together,” he said.

It was reported that the Housing and Local Government Ministry plans to build about 80,000 housing units for the benefit of some 400,000 people under the 12th Malaysia Plan.

Prime Minister Datuk Seri Ismail Sabri Yaakob said details of this initiative would be in the 12th Malaysia Plan and Budget 2022 that would be tabled soon.

The shortage of public housing for lower income groups in Penang has been a long-standing problem made difficult to resolve because of inherent land scarcity in the state. 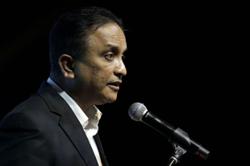