State housing committee chairman Jagdeep Singh Deo said the approval for the upgrade of the lifts at Block 42A would cost RM239,400 in total.

Under TPM80PP, a total of RM45.24mil has been allocated so far for private housing projects such as Sri Saujana Apartments.

The allocation will cover 479 projects, of which the highest scope of work is the upgrading and replacing of lifts (277 projects), and replacement or repairing of water tanks (135 projects).

Jagdeep said as of Sept 9, RM285mil had been spent by the state to maintain public and private housing schemes.

Jagdeep said despite the pandemic, the state would continue to help Penangites with programmes such as TPM80PP.

“We will not let Covid-19 beat us because we will beat it, and we will assist where we can,” he said.

On a separate matter, Jagdeep hoped that the new Housing and Local Government Minister Datuk Seri Reezal Merican Naina Merican would continue the good relations between the state and Federal Government, especially in the housing programme.

“I welcome his appointment and as he is a Penangite himself, I hope he can continue with the work that we have done here,” he said.

He also thanked Reezal for making the effort to call him personally and invite him to a meeting in Putrajaya.

Jagdeep led a delegation to meet Reezal to discuss housing issues in the state on Monday.

On the vaccination exercise for teenagers, Jagdeep urged the Federal Government to consider the needs of Penang and other states.

He said it was good that the Federal Government had carried out vaccination for teenagers in Sarawak and Selangor, and stressed that Penang and other states should get similar attention.

“We must ensure that all our teachers and teenagers who are going back to school in October get vaccinated as soon as possible.

“The health of teenagers returning to school cannot be compromised as there are so many cases in Penang now,” he said. 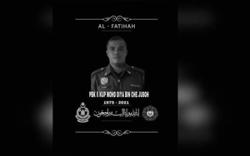