NATASHA Azman, five, was spotted riding a bicycle while her father held onto the handle bars at Dataran Putra in Precinct 1, Putrajaya.

A few steps away, her six-year-old twin brothers were blowing bubbles under the watchful eyes of their mother.

Their father Azman Rafie, 38, said it was good to be outdoors as a family once again.

“We haven’t had an outing in months.

“It is nice to finally be able to spend some quality time with my children,” he said when met at the administrative capital over the weekend.

They were among the thousands who took the opportunity to visit local attractions now that inter-district travel is allowed in Selangor, Kuala Lumpur and Putrajaya under Phase Two of the National Recovery Plan.

Unable to cross state borders yet, many Klang Valley folk have been flocking to nearby attractions in droves since Sept 10.

Checks by StarMetro at Dataran Putra found that the visitors comprised mostly parents with small children.

A few adults were spotted exercising — either jogging, cycling, brisk walking or just taking a stroll.

Mother-of-four Nora Rahman, 37, said her children had not been out of their house in Cheras, Kuala Lumpur, for three months.

“Every day it was just the same old routine of taking out the laptop to attend their school lessons online.

“I feel sorry for them and worry about their health after being cooped up at home for so long,” she said. Most of those seen at Dataran Putra in Putrajaya over the weekend were families who came with their little ones in tow to enjoy the fresh air after the Klang Valley entered Phase Two of the National Recovery Plan. — FARID WAHAB/The Star

Also there was retiree Mahirah Omar, 57, who expressed concerns over the lack of physical distancing.

She also noticed that many people around her had discarded their face masks, especially when taking selfies and wefies.

“I really hope they follow the rules and stay masked.

“Children have yet to be vaccinated so we need to be mindful of our actions,” said Mahirah who came with her daughter from Setapak, Kuala Lumpur.

Others there had a different purpose in mind as they were seen pushing a trolley among the crowd, selling drinks and snacks.

A trader who only gave his name as Ghani, 40, said he decided to try his luck at the square after hearing from his friends that many people were gathering there.

“I usually set up stall in my housing area in Seri Kembangan, but sales there have been poor,” he said. 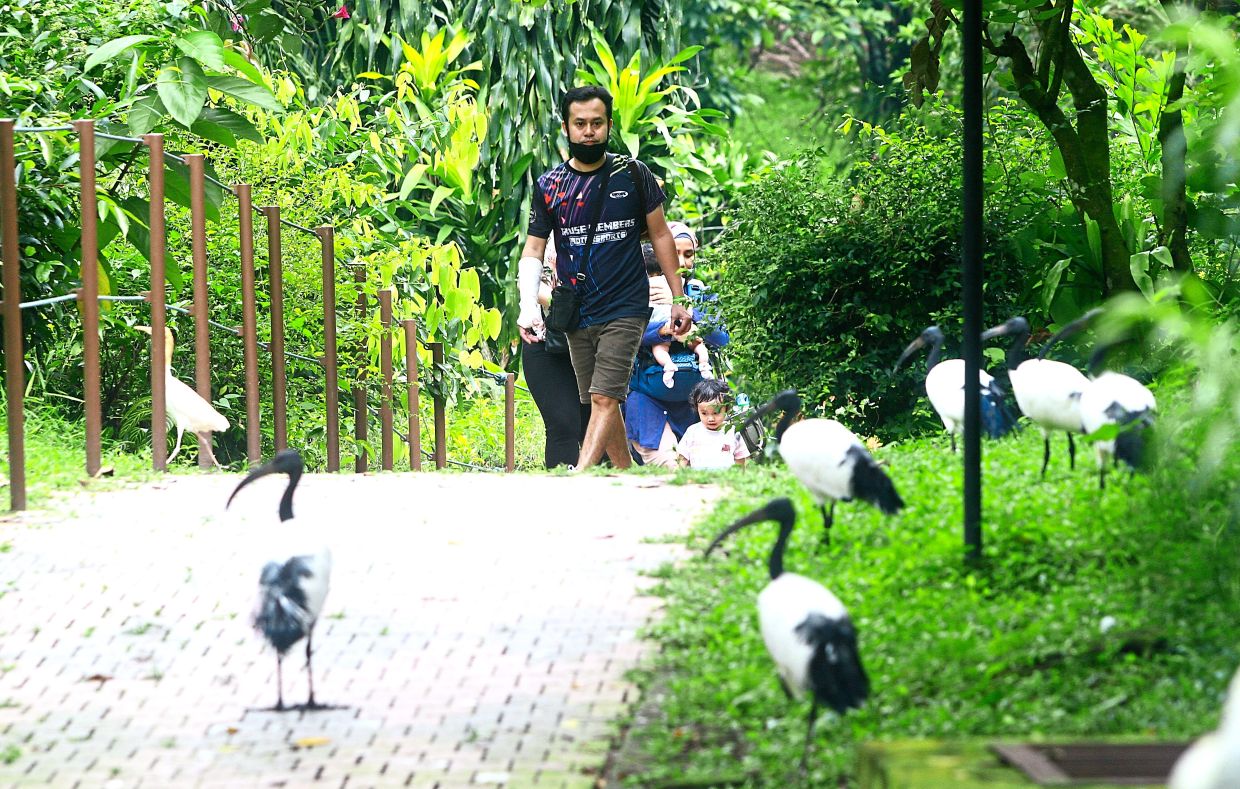 KL Bird Park is among the venues of choice for those wanting to take full advantage of the relaxed rules. — Photos: CHAN TAK KONG/The Star

The father of one lost his source of income early last year after his contract with a government agency was not renewed.

“Hopefully, Covid-19 infections in the Klang Valley will remain low so that we can enter Phase Three soon,” he added.

Another trader who declined to be named, said although there were signboards prohibiting hawker activities, they were desperate to earn a living as not everyone was fortunate to have a stable income now.

“For some of us, the pandemic has changed our lives for the worse.

“Many of us who worked in the private sector had been laid off,” he said.

Over in Kuala Lumpur, Mat Hassan Marpin, 36, went to Central Market with his wife and four children from Banting, Selangor, to do some sightseeing.

“They have never been here, so I thought it would be a nice change for them after spending so much time at home,” he said.

Souvenir shop worker Mardiana Udin, 36, said the lifting of the ban on inter-district travel had brought hope that business would once again flow to the cultural hub.

“Many shops have closed temporarily since June because there were no customers.

“Now, many are adopting a wait-and-see attitude to see if people will come out again in large numbers before deciding to reopen,” she said.

Shakib Ali, 65, who works at a confectionery shop, hopes the city will be able to welcome visitors from other states soon, even if business from foreign travellers remains a distant dream.

“I really hope life can return to normal and all activities can resume like during pre-pandemic times,” he said.

In a statement on its official Facebook page, the cultural market said it was open from 10am to 6pm daily, but only those who were fully vaccinated could enter.

At Merdeka Square, roads leading to the site were closed, but a few people were spotted strolling in front of Bangunan Sultan Abdul Samad.

Meanwhile, at KL Bird Park, many families took the opportunity to bring their children for a change of scenery.

“People want to enjoy nature after the lockdown,” he said, adding that he planned to visit the National Zoo when it reopens.

But Hashim Mohamad, 37, stressed that people should not throw caution to the wind just because they had been fully vaccinated.

“We must not forget that the Covid-19 is still around and if we are not careful, cases may go up and we may have to lock down again,” he said.