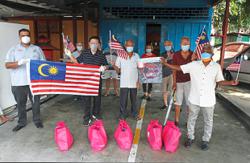 IN CONJUNCTION with the National Day and Malaysia Day celebrations, Jalan Carey Section 1A Rukun Tetangga (RT) in Petaling Jaya, Selangor, carried out various initiatives and activities to engage its residents and the community.

Its secretary Jayakumaran Shanmugam said a group of volunteers set up the RT Merdeka planning team comprising residents and committee members to promote the activities.

“The volunteers were outstanding with their ideas and contributions.

“Everything was done within our WhatsApp group as we had to strictly follow standard operating procedures during this challenging time, and to avoid any face-to-face meet-ups unless necessary.

“We met up in person only once during the month-long campaign to decorate our RT building and distribute flags and flyers to the residents,” he told StarMetro. Packets of Merdeka Theme Cake that were given out to food delivery riders as a show of thanks.As a result of their well-coordinated efforts, Jayakumaran said they received many responses for each of the projects.

This allowed them to successfully compile and complete each activity on time, he said.

“Although we knew this year’s Merdeka celebration was going to be different again, with the Covid-19 pandemic and economic crisis still ongoing, we wanted to remain steadfast and inject the spirit of patriotism into the initiatives.

“Our core objective is to encourage everyone, regardless of age, ethnic background, culture or religion, to join us in celebrating Malaysia and our uniqueness as one,” he added.

“The 1 Rumah 1 Jalur Gemilang was to encourage residents to hoist the national flag at their premises.

“The RT Merdeka planning team printed flyers that were distributed with the flags to each household,” said Jayakumaran.

“The committee members decorated the RT building by putting up banners commemorating the theme for the celebration.

“Quiz Kemerdekaan was to encourage everyone to learn more about our National Day through an interactive quiz we posted on our Facebook page,” he added.

The Harmony Pray initiative was to encourage residents to join in a prayer session that they could conduct in their respective homes and places of worship, and share their photos and videos.

As the final part of the campaign, the residents penned down their personalised messages to frontliners (including police, medical personnel and PPV volunteers).

“We plan to join forces with another two Rukun Tetangga sectors and hand over the cards personally to IPD Petaling Jaya police station and Jalan Penchala Fire and Rescue Station on Sept 11,” said Jayakumaran.

To reward food delivery riders for their hard work, the RT organised the distribution of a Merdeka Theme Cake.

The committee members placed the packed cakes in front of their houses and flagged down the riders to pick up a pack.

The other packets were distributed to riders at nearby locations, where they were waiting to pick up orders outside restaurants in Petaling Jaya Old Town and Section 14, Petaling Jaya.

Due to the pandemic, the RT had to cancel its Ambang Merdeka Day celebrations for the second year.

It would usually see fun activities such as children’s colouring contests, musical performances as well as a good spread of food and merriment on the eve of National Day.