No King of Hades effigies

THOUGH Penang government allows Hungry Ghost Festival celebrations to be held with standard operating procedures, it is too late for effigy makers to build awe-inspiring Tai Su Yeah (King of Hades) paper effigies.

“We do not have enough time to get them ready,” said craftsman Loh Soo Ban, 66.

In previous years, Loh could get 34 orders for Tai Su Yeah effigies from ‘Phor Thor’ committees.

“Since last year, I have not been receiving orders as many celebrations are either cancelled or scaled-down,” he said at his shop in Carnarvon Street, George Town.

Loh added that it would take them around three months to construct the effigies.

“Each year, my workers and I would be busy from the fourth lunar month to the end of the seventh lunar month in preparation for the celebration. 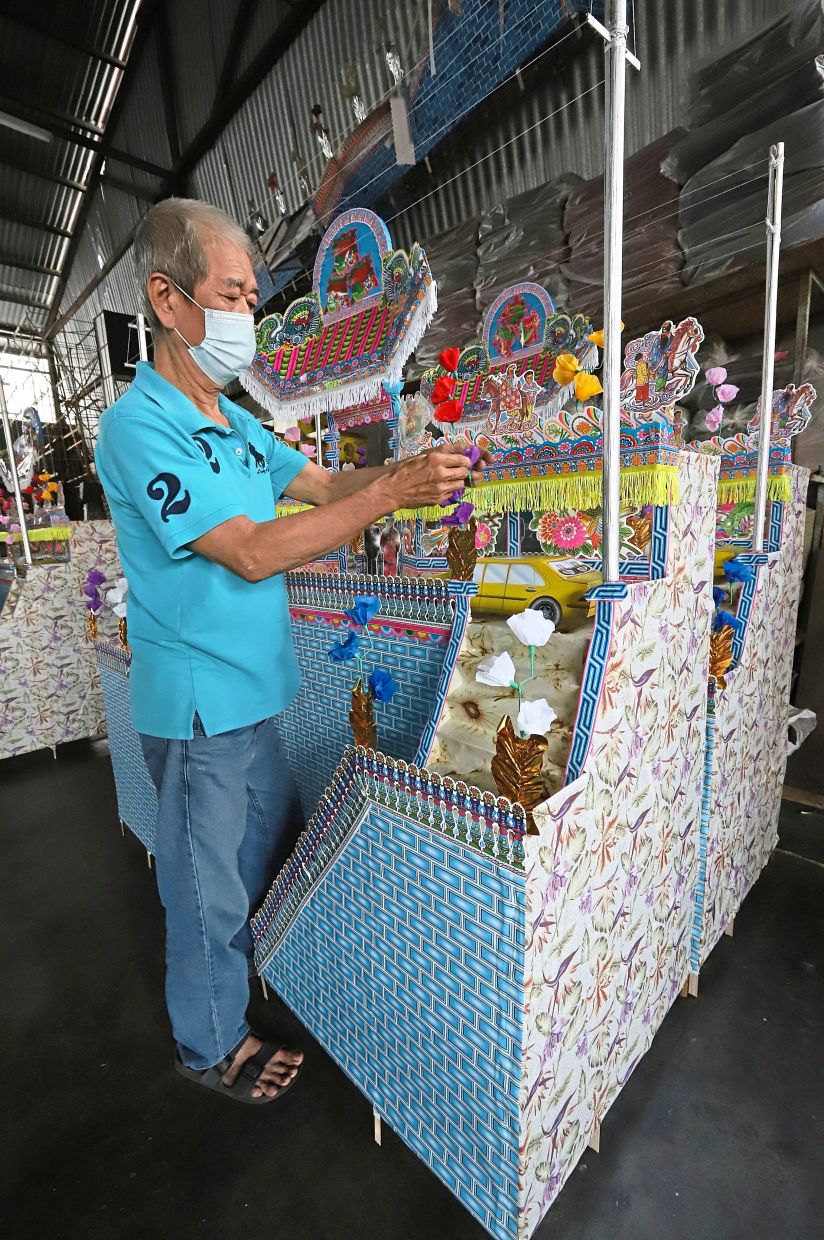 Funerals are now conducted on a small scale and some families have decided not to burn paper paraphernalia for the dead, says Loh.

“We would construct the effigies in parts before setting them up in the middle of the sixth month of the lunar calendar.

“As there will be no celebrations this year, we have no orders for effigies, which means zero business for me,” he said.

Loh said he suffered around RM100,000 in losses due to the bad times.

“My monthly expenses are around RM18,000 as I need to pay rental, utilities as well as my workers.

“Beginning early this year, the cost of materials increased by around 40% due to transport and delivery fees.

“Prior to the Covid-19 pandemic, I could sell more than 30 paper houses for funerals in a month.

“However, due to the movement control order, funerals are conducted on a small scale and some families decided not to burn paper paraphernalia for the dead,” he said.

Effigy maker Ng Chi Wang, 64, from Berapit on mainland Penang, who is known for making the biggest Tai Su Yeah effigy in town, said he has no orders this year either.

“This is the second year in a row that I have zero business during Hungry Ghost Festival.

“Prior to the Covid-19 outbreak last year, I used to get more than 20 orders to make effigies in various sizes every year.

“As the number of Covid-19 cases in Penang is on the rise, many associations decided to cancel celebrations,” he said.

The month-long Hungry Ghost Festival which started on Aug 8, will peak on the 15th day this lunar month tomorrow.

According to Chinese belief, ghosts exist in a realm where they suffer from great thirst and hunger that can never be sated — a consequence of bad karma.

The best way to ease their suffering is to make offerings on their behalf. Merits accrued from such deeds can be dedicated to the spirits in hope that they may have a better rebirth.

Called Yu Lan in Mandarin or Phor Thor in Hokkien, the festival is held every year during the seventh month of the lunar calendar.

Across Penang, stages are usually set up in predominantly Chinese areas and evening performances are held to entertain both humans and ‘non-humans’ alike.

But more than 400 places around Penang that usually hold such celebrations will not be staging such performances this year due to the Covid-19 pandemic.