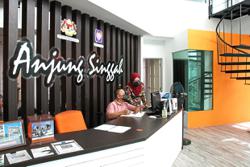 Up until June, MBJB removed 3,234 vehicles for various offences, including obstruction and being abandoned. They are stored at Taman Mount Austin, Johor Baru. — Filepic

Johor Baru City Council (MBJB) recorded a slight increase in revenue collection for the first six months of this year.

Mayor Datuk Adib Azhari Daud said the target for 2021 was RM498mil but the actual collection was RM225.22mil or 45% of the estimate.

“It comprises tax collection of RM176.62mil, non-tax revenue of RM34.46mil and non-revenue receipts of RM14.14mil,” he said during MBJB’s virtual full board meeting.

He added that when compared to the corresponding period last year, MBJB recorded a 0.29% increase or RM660,000.

For operating expenditure, the city council spent a total of RM97.82mil, equivalent to 37% of the target for 2021.

“If we compare the total expenditure in the same period last year, the expenditure within the first half of 2021 was 6.46% higher.”

On another matter, he said that until July 25, the city council had received 7,989 public complaints with 7,252 or 90.8% having been solved while action was being taken for the rest.

He added that fallen trees and problems related to it topped the list with 4,645 complaints.

This was followed by road-related complaints at 3,343 which included potholes, 2,750 complaints on animal or insect-related, 2,666 reports of damaged street lights and 2,344 complaints on cleanliness.

On enforcement, he said MBJB had taken action by removing 3,234 vehicles within its jurisdiction up to June this year for various offences, including obstruction and abandoned vehicles.

Some 104,605 premises had been inspected by MBJB between January and June this year.

Out of that number, 102,075 premises had adhered to the standard operating procedures (SOP).

“I would like to remind everyone that new Covid-19 cases recorded in Johor Baru and Johor are still at a worrying level.

“With that in mind, all of us should work together and follow the SOP,” said Adib.