Devadass says residents want MPK to find ways to ease their burden, not impose a penalty.

PROPERTY owners in Klang should be given a waiver on the RM20 fine imposed on late payment of assessment tax, Klang Consumer Association president Devadass Anjan said.

He urged Klang Municipal Council (MPK) to waive the fine as a way to ease the burden of ratepayers who have been impacted by the Covid-19 pandemic.

He said many people faced financial difficulties due to loss of job and escalating prices of essentials.

“The association has received numerous calls for us to ask the municipal council to waive the penalty announced last week, as people have been hit hard through loss of jobs and wage cuts besides facing other problems due to the pandemic,” he said.

Devadass said the association discussed the matter with ratepayers in several neighbourhoods.

He said MPK must find ways to help ease the people’s burden.

“We understand that MPK needs the revenue but it has to look for other ways to earn it.

“Its Finance Department could speak to homeowners, hawkers as well as small and medium-scale traders to address their hardship,” he said, adding that the council could instead propose a payment plan for ratepayers to settle their assessment tax.

Resident Mohamed Hussain Maideen, 53, said MPK must consider a waiver on the penalty and not pressure people as many were facing financial problems.

Bandar Botanic Residents Association president Jacob Mathews said MPK management and its councillors must be in unison in offering the waiver and helping taxpayers during the current difficult time.

“Residents are of the view that MPK should waive the penalty on the late assessment payment as it would not have a significant impact on the council’s budget,” he said.

As many homeowners in Klang are senior citizens, they prefer to pay at the counter and since payments are now done online, they may take a longer time, Mathews reasoned.

He said these should be among the factors that the MPK should consider. 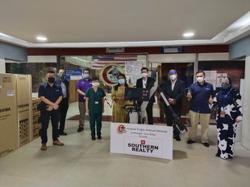