Talents put to charitable use

The fitness trainers involved in Burpees for A Cause movement seen here during a Zoom call.

IT is gratifying to see that humanity can put aside their differences and come together to help people who are suffering tremendously, when a crisis bears down on society.

During the ongoing Covid-19 pandemic, Good Samaritans have come forward in droves to help feed the hungry, who have greatly increased in numbers because of an upsurge in job losses.

These noble acts of organising community food aid amplify the unity in our multiracial society.

But feeding the hungry is not the only assistance needed at this time.

There are people who are so cash- strapped that they are at the end of their rope emotionally, unable to pay rent and utility bills, or buy medicines and other necessities to satisfy the bare minimum in basic living.

In addressing all these and more, innovative individuals have come up with interesting ways to give back to society, making it possible for donors to contribute while the givers themselves benefit from the causes in a holistic manner.

StarMetro speaks to founders of three such partnerships.

Working out for a cause

If you are familiar with high-intensity interval training exercises, you will know why people have a love-hate relationship with the dreaded burpee.

One of the most challenging forms of exercise, the movement targets almost every muscle in the body and is categorised as a great callisthenics activity, where a participant uses his own body weight as resistance.

Despite the strain on the body, a group of fitness trainers banded together for a fundraising effort in which they were required to perform 1,000 burpees each in seven days.

“Burpees for A Cause” surfaced to raise awareness and provide food relief for the poor, acting in collaboration with child activist and Chow Kit Foundation (YCK) founder Datuk Dr Hartini Zainudin and the Zer0Hunger movement.

The latter is a sustainable social impact action platform, which aims to systematically address hunger in Malaysia.

It maps out hunger spots via its geolocation hunger map to match aid provided by the government, non-governmental organisations (NGOs) and other fulfilment agencies to avoid duplication and food wastage while enabling a more systematic supply chain.

Fitness trainer Marissa Parry, who leads Burpees for A Cause, told StarMetro that it has managed to raise over RM120,000 for the food relief initiative.

She said she was moved by Hartini’s photos on social media as those images showed families from marginalised communities in need of aid, especially food.

At first, Parry along with her friend Tanya Tolman, who is based in the US, did a couple of online workouts to raise funds and managed to collect a few thousand ringgit.

But Parry soon realised something bigger needed to happen and within three days, Burpees for A Cause was up and running.

“The first fundraiser was held in February this year with a team of 13 trainers.

“We each pledged to complete 1,000 burpees in seven days and raised over RM60,000 in just over a week, and even had other people join in with burpees and help raise funds,” she said.

“This money has been used to feed 150 families in Sabah over a few months.

“The money soon ran out, which is why we started the second movement last month,” she added.

This time, participants can pledge any number of burpees to complete in a week, which has opened it up to a wider group of participants who have different fitness levels but share the same goal — to help those in need.

“We blast out this message on our social media pages and WhatsApp, inviting people to sponsor our pledges,” Parry said.

“What makes the fundraiser enjoyable is that we get together on Zoom to check in with each other in the morning and to do burpees.

“Especially during a time when we have limited direct physical connection with each other, this is a really good way to stay connected and keep motivated.

“It’s not about the amount of burpees you can do, it’s about helping those in need and Burpees for A Cause has been a fulfilling way to do that.

She continued: “People are so amazed at how many burpees they can push themselves to do.

“And what’s even better is seeing how much we have raised as a group,” said the mother of two.

To be a participant in Burpees For A Cause, email endhunger@zer0hunger.org or find @zer0hungerorg on Instagram.

Local musicians count among those who have suffered the worst setbacks since the Covid-19 pandemic impacted the nation last year.

With prolonged closure of pubs, restaurants and entertainment outlets, many performing artistes have been left on the brink of collapse, unable to sustain a livelihood and faced with mounting bills to settle.

A number of musicians decided to start online live streaming from their homes, earning an income via those platforms.

Subsequently, these same musicians decided to band together and help out their brethren in need.

At first, their aim was to encourage the public to contribute a minimum of RM1 every week to five selected musicians who are in dire need of financial assistance.

“But ‘five’ became the magic number because this project involved myself, Malik and musicians Vishnu Shakthi, Colin Jansen and Sherman Tan.

“And we thought RM5 was not too much for individuals to donate,” said Gerard.

Another musician, Soon King, has since come on board The 5 Ringgit Initiative.

Recipient musicians are selected by social enterprise Brada Maju from its pool of members, and include other special cases (those in need of funds for medical emergencies).

Their names and bank account numbers will be displayed during the musicians’ live stream performances for donors to bank in their donations directly.

Neither Brada Maju nor any of the performing musicians is involved in the channelling of funds to the recipients.

“The reason is to ensure total transparency and accountability,” Gerard explained.

“The 5 Ringgit Initiative does not consider race nor religion, it is for us to lead by example in a proactive manner and promote positivity to help musicians who need immediate relief.

“Our viewers also get to enjoy our music for free at the same time,” he added.

So far, Gerard and the others have completed five rounds of contributions online, and will continue to do so on different days of the week.

Jansen said aside from helping recipient musicians with funding to buy food and essentials, the donations could help them save money to buy basic live-streaming gear to start performing again.

“This is the time to step up for fellow musicians.

“If they can buy simple equipment to do live streams, it can help them earn some income too.

“Everyone can be part of The 5 Ringgit Initiative, by sharing our posts on social media with as many people as they can and garner the attention so those who need help can get it,” he said.

Those who wish to help can visit The 5 Ringgit Initiative page on Facebook for details.

When Malaysia Positive Psychology Association (MPPA) founder and president Sunil Hasmukharay saw his sister, a specialist at Universiti Malaya Medical Centre, and many of her colleagues endure emotional stress last year in the medical front line, he felt he had to do something to help.

He initiated free coaching and conversation to support Covid-19 frontliners.

Within two weeks, they had responded to and coached some 720 callers, mainly doctors, nurses and medical personnel.

This was accomplished with the support of professional coaches, who are part of the Malaysia Association of Professional Trainers and Coaches, of which Sunil is also co-founder and president.

“It was really heart-breaking to hear their frustrations and the kind of stresses our medical frontliners were going through.

“We needed to ensure they remained strong so as to be able to support and save our nation during the pandemic,” he said.

The aim of MPPA is to promote and advocate for positive mental well-being in individuals, communities and organisations for optimal functioning of society.

“MPPA aims to be a beacon of light to spread the power of positive psychology in our nation.

In 2019, prior to the pandemic, he had spearheaded a nationwide effort to empower public universities with Solution Focused Career Coaching Certification, in partnership with Talentcorp under the Human Resources Ministry and supported by the Higher Education Ministry.

“Midway into the pandemic, we saw a large number of small to medium enterprises that were shutting down their businesses as well as retrenchment and unemployed graduates.

“Then came the idea of providing free career coaching for university graduates in collaboration with Talentcorp, where we accomplished 1,500 hours of career coaching with the support of 150 career coaches,” he said.

Most of the volunteers were corporate leaders or university lecturers, who previously had attended Sunil’s training programmes.

“It was good to get the support of so many corporate friends, human resource leaders and past programme participants, who rose to the call during these challenging times,” he added.

With youth leaders in various NGOs reaching out to Sunil for support to empower their members, he launched the Solution Focused Youth Coach initiative. The fitness trainers involved in Burpees for A Cause movement seen here during a Zoom call.

Sunil initiated coaching for the mental and emotional wellbeing of those suffering stress during the pandemic, including frontliners, with the support of other professional coaches.

Fitness trainer Marissa Parry leads the Burpees for A Cause movement to raise funds for food relief. 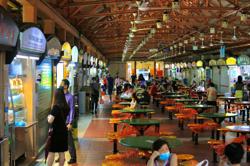