CHICKEN traders on Penang island claim they are suffering losses of at least 40% after installing chillers at their stalls in the markets.

Penang Chicken Traders Association chairman Azizur Rahman said out of the 177 chicken traders on the island, only 35% of them did not set up chillers.

“After installing the chillers, we incurred losses up to 40%.

“People do not want to buy from us as they doubt the freshness of our chicken.

“Many customers still prefer birds that are freshly slaughtered in front of them.

“Some customers told us that they prefer to get their chicken supply at supermarkets because prices are lower.

“The prices of chicken will definitely go up after Hari Raya, ” he said during a press conference at the Perak Road market in George Town on Sunday.

Azizur added that poultry traders are completely against the policy for them to instal chillers.

“We hope that the state government will reconsider the policy.

“We have been waiting for a response from Chief Minister Chow Kon Yeow, but so far, we have not heard from him.

“We would also like to question what the state government is going to do after June 1 as there are currently no slaughter houses on the island, ” he said.

MBPP had deferred enforcement of the policy for poultry traders to instal chillers which was supposed to come into effect on March 1 to end of May.

Yew had said that MBPP wanted all poultry traders to instal chillers at wet markets to ensure the chickens sold are fresh.

Meanwhile, Penang MCA liaison committee secretary Yeoh Chin Kah urged Chow to start a dialogue session with chicken traders in the state and build chicken slaughterhouses instead of a centralised storage and

distribution centre.“Penang MCA will start a petition to reflect people’s strong desire to buy fresh chicken instead of chilled birds, to the state government.

“MBPP should allocate funds to set up chicken slaughterhouses in various areas in accordance with Section 73(e) of the Local Government Act 1976, ” he said.

Penang MCA vice-chairman and youth chief Lim Swee Bok reiterated that chicken traders are against the policy of establishing a centralised storage and distribution centre.“Many protests have been held but the state government insisted on going its own way and did not listen to them.

“There are many doubts on the establishment of a centralised storage and distribution centre, which is inappropriate and had aroused strong resentment and opposition from chicken vendors and the public, ” he said.

Penang MCA spokesman and Bukit Bendera MCA division chairman Tang Heap Seng said if MBPP wants to ban chicken traders from slaughtering chickens at markets, they must set up slaughterhouses for all ethnic groups instead of asking them to buy their supplies from designated suppliers.

“Selling chicken from a distribution centre will increase the cost for sellers as well as the consumers.

“The public will also worry that the chicken is not fresh and they can only buy frozen chicken.

“Instead of building an RM11mil storage and distribution centre, the state government should build several slaughterhouses for all ethnic groups.

“If chicken vendors can slaughter the chickens themselves, they can estimate the number of chickens needed and ensure that the chicken are 100% fresh.”

The press conference was attended by some 50 people including MCA members and 10 chicken traders. Azizur: Some customers told us that they prefer to get their chicken supply at supermarkets because prices are lower 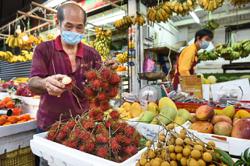