Beautification of Sungai Bonus set to start in July

PART of Sungai Bonus and its riverbank behind the Wangsa Sari people’s housing project (PPR) in Wangsa Maju, Kuala Lumpur is set to be cleared and beautified.

StarMetro learnt that a meeting was held between stakeholders, residents and Kuala Lumpur City Hall (DBKL) on a proposed massive clean-up of the area.

“We are going to plant flowering trees, fruit trees as well as herbs and vegetables.

“We chose flowering plants to attract pollinators like birds, bees and butterflies, which is good for the ecosystem, ’’ he said.

He added that the agency would also create a place for people to rest and relax, with information boards about the river.

The beautification project will involve an area spanning some 50sq ft.

“There is great potential for this space to become a recreational area for residents because of its proximity to PPR Wangsa Sari and surrounding neighbourhoods.

“Currently, this spot has become the community’s dumping ground.

“We want to change that and get the people involved so they can become the guardians of the place, ” said Mohd Zahir.

He said work was expected to start on July 1 and completed by Dec 31 this year.On the cost, he said it would be borne by the various agencies involved.

“We haven’t finalised the cost as it will be discussed at the next meeting, ’’ he elaborated, adding that the scope of the work would also be decided then.

As the tributary of Sungai Klang, it is notorious for being one of the most polluted rivers in the city.

The river was categorised as Class IV-V. Class I is pristine and suitable for drinking while Class IV and V are very polluted and not suitable for contact with the body.

The authorities have attributed the pollution to people who live and work in the area.

They include operators of food outlets, workshops, wet and night markets, street hawkers as well as industries and factories around the area that discharge untreated domestic and industrial effluents into the river through drains.

It was previously reported that according to a Drainage and Irrigation Department (DID) study, about 500 tonnes of waste is disposed daily in the Bonus basin alone.

SWCorp is working with non-governmental organisations like Local Agenda 21 (LA21), DID and Lestari Alam Malaysia on the project.

Meanwhile, during a recent visit by StarMetro to the site, it had lush greenery but was in desperate need of some pruning.

There was some encroachment into the river reserve, including illegal extensions.

Someone had also built a small zinc structure on the land and was living there.

Several residents had carried out community farming activities on the land too.

Lestari Alam president Rashdan Rashid said he was currently in talks with the individuals to register their names with DBKL so that the farming could be legalised.

Several residents of PPR Wangsa Sari expressed their happiness over the project.

“We are looking forward to using the spot for jogging and walking, ’’ said kindergarten teacher Sarah Ahmad Masri, who has been living in the area for more than five years.

“I have always thought about going down to the riverbank, but was afraid of snakes and mosquitoes, ’’ said another resident who only wanted to be identified as Nik Azmi.

“When it is ready, I hope to bring my family for a picnic there, ’’ added the father of three.

Rashdan said he hoped to see the community taking ownership of the area and keeping it clean once the project was completed.

“I hope to see some behavioural change from the residents around the area.

“The river is an asset and must be preserved for future generation.

“It is our responsibility to ensure that it is protected.

“Over at PPR Pekan Kepong, the children are spearheading recycling and green initiatives, and we hope to see that happen here too, ’’ he added. 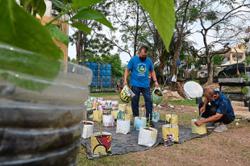