THE Raja Zarith Sofiah of Johor Foundation (RZSJF) is reaching out to the less fortunate by focusing its efforts on three key areas.

Hishamudin said the foundation had distributed 100 laptops to children from B40 families in Johor Baru to assist them in their studies during the Covid-19 pandemic.

He said the pandemic had resulted in a new norm for education.

“Schools and universities in Malaysia were closed and students had to attend virtual classes, ” he said.

The recipients of the laptops, of whom 50 were primary school pupils and the rest from secondary schools, were selected based on names submitted by the Johor Education Department.

Hishamudin said the foundation had also distributed toys to pre-schoolers whose families had registered with the E-Kasih programme.

“We also organised a drawing competition this January with 512 participants.”

He said each participant had received a drawing kit and the competition was divided into five categories.

“Their drawings, judged by professional judges, were presented to Permaisuri Johor Raja Zarith Sofiah who selected the winners, ” he added.

Hishamudin said hydroponic sets were also contributed, under the social initiative, to lower-income families so they could plant vegetables at home during the MCO.

“They can reduce their spending by growing their own vegetables, ” he said.

Besides these, RZSJF had collaborated with the Malaysian Red Crescent Society to distribute food baskets to those affected by the pandemic, he elaborated.

“We will also distribute bubur lambuk on April 19 in conjunction with Ramadan, ” he added. 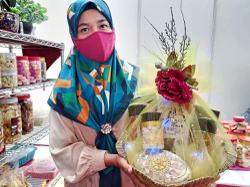