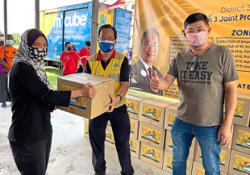 The children and teachers at the newly launched autism centre in Pulapol. – AZLINA ABDULLAH/The Star

The Inspector-General of Police said all those in the police force should know by now the specific way to deal with those with autism as the SOP guidebook was introduced in March 2019.

“For example, use of force is not permitted when doing an arrest or cuffing those with autism.

“The SOP covers dealing with those with autism, whether they are a victim, a suspect or a witness, ” he said in a press conference after launching the Pengaman Autism Centre at the Police Training Centre (Pulapol).

Abdul Hamid added that he had instructed all state police chiefs to ensure that the guideline reached all personnel in the respective state contingents.

He said the police wished to avoid a situation where an autistic person or someone with a disability is mistreated or perceived to be badly treated by the police.

Abdul Hamid said this in reference to a September 2018 incident where a 22-year-old man with autism was detained for allegedly outraging the modesty of a woman in Subang.

“We don’t want a recurrence of such incident where those with autism or any disability are mistreated by the police, ” he added.

“This is an honourable venture that will benefit children of police personnel as well as members of the public, ” he said.

He added that the centre, which began operations in August last year, initially accommodated 12 children and four teaching staff.

“Now it has 19 children, including six children of civilians and six of teaching staff.

Abdul Hamid added that the centre was vital as 498 children of police personnel had been diagnosed with various disabilities, including autism.

“I hope we can establish an autism centre in each state so that we can help more children with autism, especially children of our own personnel.

“I have also discussed with the Bukit Aman management director to facilitate the transfer of personnel with autistic children to Klang Valley so that they will find easier access to the centre, ” he added.

Meanwhile, Hussin, in his speech, said the centre was meant to ease the burden of police parents as the cost of private autism centres were costly.

“We have worked towards establishing the centre since 2019. We hope to expand the services here to include a speech therapist, ” he said.