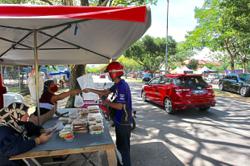 Wangsa Maju MP Datin Paduka Dr Tan Yee Kew said Lot 20002 and Lot 20006 were located next to a roundabout along Jalan 14/27b and near some shoplots.

“Both lots are owned by PTGWP.

“Previously, I had suggested to Kuala Lumpur City Hall (DBKL) and PTGWP to turn the vacant plots into parking lots to address the lack of parking in the area but did not get any response.

“Petty traders have been eyeing the spots but if they are to conduct business there, they will be encroaching on government land, ” she said during a press conference at Desa Setapak Rukun Tetangga Community (KRT) cabin along Jalan 1/27b.

Dr Tan said her office received numerous complaints from business owners in Desa Setapak about a nasi lemak seller who put up a few stalls on Lot 20002 without approval.

“The nasi lemak seller allegedly chased away three other roadside traders operating outside the vacant land.

“One of the roadside traders was an elderly man selling pau while another trader was a disabled person selling kuih.

“This seller even cut through the metal railing around the plot to access the place and sell food.

“I have highlighted the matter to DBKL for them to take further action, ” she said.

At the site, the seller, who did not want to be named, was seen manning two stalls with a helper selling burgers and nasi lemak.

Several tables and chairs were placed behind the stalls for customers to sit and eat there.

Dr Tan said she had invited the seller to her office in the hopes of reaching an amicable solution.

“It has been an ongoing issue, as petty traders would set up stalls on these two vacant plots.

“If the plots are converted into a parking lot or a proper food court to house roadside sellers in the area, it will stop people from encroaching on the land, ” she said.

According to Dr Tan’s assistant, Andre Lai, the same individual had previously encroached on Lot 20002 in November 2019.

“Back then, he set up a stall along the pedestrian walkway next to the road and DBKL came to seize the stalls under Section 70 and 70A of the Street, Drainage and Building Act 1974, ” he said.

A shopowner, who only wanted to be known as Teong, said the area had also become unhygienic and dirty as there was no running water at the stalls.

“It has become a nuisance and an eyesore, ” she complained. 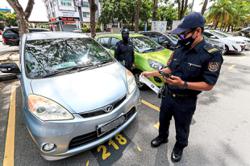