JOHOR government is planning to collaborate with Kulim (M) Bhd, a wholly-owned subsidiary of Johor Corp (JCorp), to secure jobs for the homeless and unemployed at a pineapple plantation in Ulu Tiram, Johor Baru.

State women, family and community development committee chairman Zaiton Ismail said there were 180 homeless people who were registered with the state Welfare Department (JKM), and they would be screened to ensure they were fit to work.

She said Kulim was ready to offer jobs to interested candidates with a starting salary of RM1,500. Amenities will be provided for free, including a three-bedroom house equipped with water and electricity.“The company is looking for unemployed locals to fill up about 600 various positions.

“Parents working at the plantation can also take advantage of the free day-care centre services offered by the company, ” she added.

Zaiton said the state government decided to give priority to the homeless living in the city centre.

“We plan to close down the food distribution centre at Dataran Tun Sri Lanang which is currently managed by the Malaysian Red Crescent Society and JKM.

“The decision was made because the majority of those who were taking food were not homeless and able to fend for themselves, ” she said, adding that she hoped homeless individuals could be moved to their new home and start work by the end of this month.

“I believe this is a better option for them. They can save their earnings for emergencies or buy food for their family as other amenities are provided for free.

“We also plan to open up this position to unemployed youths whose families are registered with JKM, ” said Zaiton.

She added that among the positions offered included palm oil or pineapple farmers and lorry drivers. 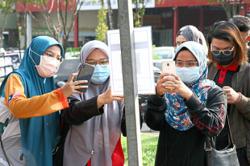