SWCorp: Hundreds of banners, bunting end up in landfills and rivers Mohd Zahir says recyclables should not end up in landfills.

IT takes only a few minutes to put up a banner or bunting on a lamp post, and the owner will probably rake in millions from the event, product or service advertised.

Removing the advertisements, however, will incur the local authority a high cost in terms of manpower and logistics, including overtime.

The story does not end there.

These materials are usually discarded at landfills, where they will take hundreds of years to degrade.

Worse case scenario, they end up in the rivers and sea, causing harm to marine life and the environment on the whole.

“We don’t have the data on the numbers but I won’t dispute the fact that there could be thousands of such banners and bunting that end up in landfills, monsoon drains, rivers and eventually, the sea, causing harm to the environment and aquatic life, ” he pointed out. 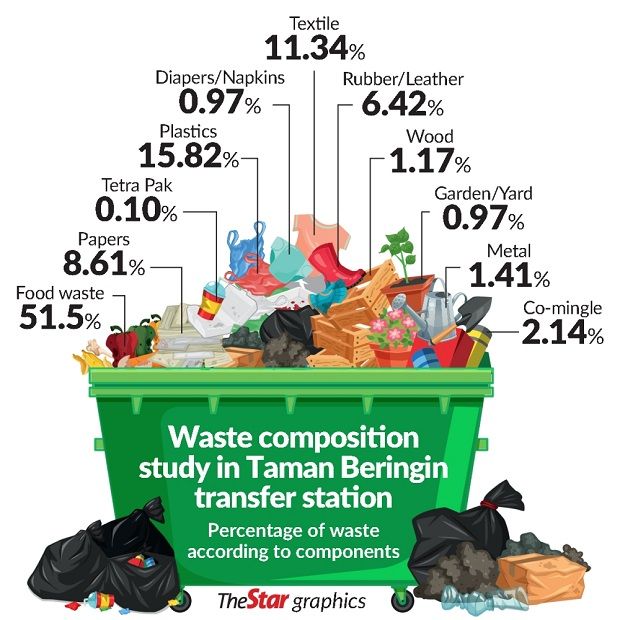 Despite the many programmes to educate the community on recycling, Mohd Zahir said a huge amount of vinyl and plastic wastes still ended up in landfills.

“We have been working with NGOs to help with recycling initiatives to stop the rot at landfills.

“All that can be recycled should be out of the landfills, ” he said.

Based on data recorded at the Taman Beringin waste transfer station in Kepong, Kuala Lumpur, Mohd Zahir estimated collected waste from Kuala Lumpur between January and September 2020 to be 558,242 tonnes.

“From that number, plastic wastes that made up 15.82% are

the second most common form of litter after organic food waste, which is 51.5% of waste thrown by people, ’’ he said.

The agency, he added, was also working with Local Agenda 21 (LA21) to educate and create awareness of sustainable living.

“Waste, once separated and recycled, can be sold and there are people willing to buy them, ’’ he said.

Mohd Zahir added that the agency had embarked on a “Trash to Cash” campaign to create awareness as well as give people the opportunity to make some money.

“But it is heartening to know that the communities practising recycling and zero waste lifestyle are doing it for the love of the environment and not for the money, ’’ he said, adding that it made the entire process worthwhile.