Ooi Lye Soon, 63, learnt the skill of making t’ng tak from his father when he was 12.

He sells ban chang kuih (pancake) at Kuantan Road market in the morning and makes t’ng tak and mee koo at his house in the afternoon.

Delicately, Lye Soon cooks sugar and water in a pot before adding in some edible pink colouring.

After boiling the sugar syrup, he pours it into several wooden moulds which have been used for more than 10 years.

“We usually sell the sugar pagoda in a set which includes a lion, an elephant, a dragon and a phoenix that are all made from sugar.

“The lion and elephant symbolise safety, the pair of dragon and phoenix means peace and harmony whereas the pagoda symbolises longevity. Lye Soon showing the freshly made t’ng tak in its wooden moulds.

“We usually use 10kg of sugar a day to produce around 50 sets of t’ng tak.

“After completing them, I will have to put the wooden mould in water to cool it before doing the next set, ” he said when met at his house in Jelutong.

Lye Soon added that the key to producing a good and detailed t’ng tak is the heat of the wooden mould and the timing.

“If the wooden mould is too hot, the surface of the t’ng tak will be rough and not as sophisticated.

“If the sugar syrup is left in the mould for too long, it will become sticky and the shape of the t’ng tak will not be well defined.

“We produce t’ng tak of three different sizes and most people prefer the large one to offer to Jade Emperor, ” he said, adding that the Covid-19 pandemic caused his orders to be reduced by half this year. 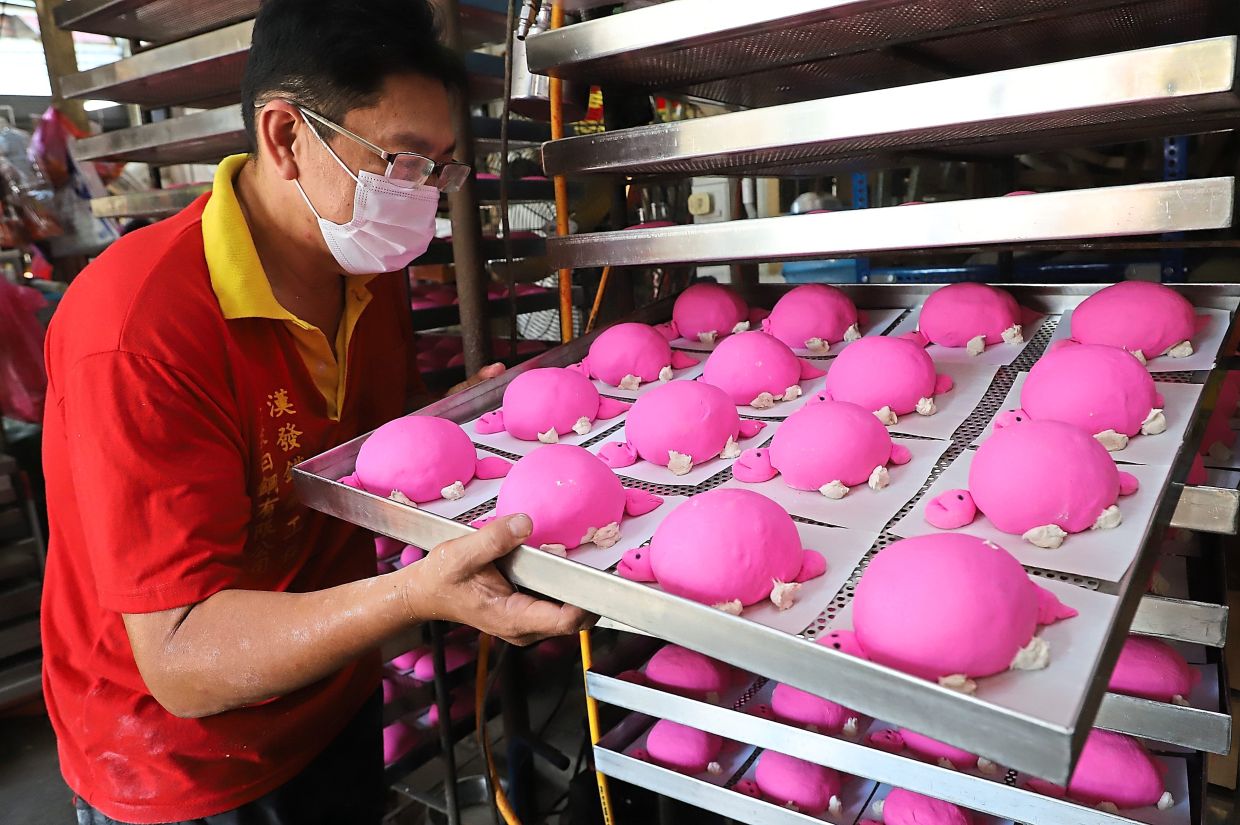 Trays of mee koo are being placed in a multi-tiered rack to be steamed.

Lye Soon said Chinese New Year and Phor Thor are the peak seasons for his business.

“I make t’ng tak almost every month to celebrate the birthdays of different deities.

“Some people prefer the t’ng tak to be pink which means prosperity and some prefer them without the colouring.

“I usually start making t’ng tak sets in the 12th month of the lunar calendar and stop on the sixth day of Chinese New Year.

“After offering to Jade Emperor, some people will use the t’ng tak to make agar-agar and some even add them into their coffee, ” he shared.

Lye Soon’s son Beng Keat, 42, said he has been making mee koo for over 30 years. Beng Keat’s wife May Tan, 43, arranging the pink t’ng tak in a tray.

“I learnt the skill from my father.

“We start our preparations such as mixing the ingredients into dough from 8am.

“We set a record by using almost 300kg of flour to make mee koo.

“We make mee koo of several sizes and we will customise different shapes and colours for our customers, wholesalers and some temples. Beng Keat showing the peach-shaped longevity buns with auspicious words while his father Lye Soon prepares another one.

“Some customers request shapes such as longevity peach, crab and fish besides the usual tortoise.

“All our mee koo are handmade and freshly steamed every day, ” he said.

Beng Keat added that he and his family can make between 70 and 80 trays of mee koo in a day.

“After waiting for the dough to rise for around 30 minutes, we will steam the buns.

“After steaming the buns, we will write auspicious Chinese characters using coloured dough on them.

“Most of our customers request characters like fu (good fortune), show (longevity) and chai (wealth), ” he said. 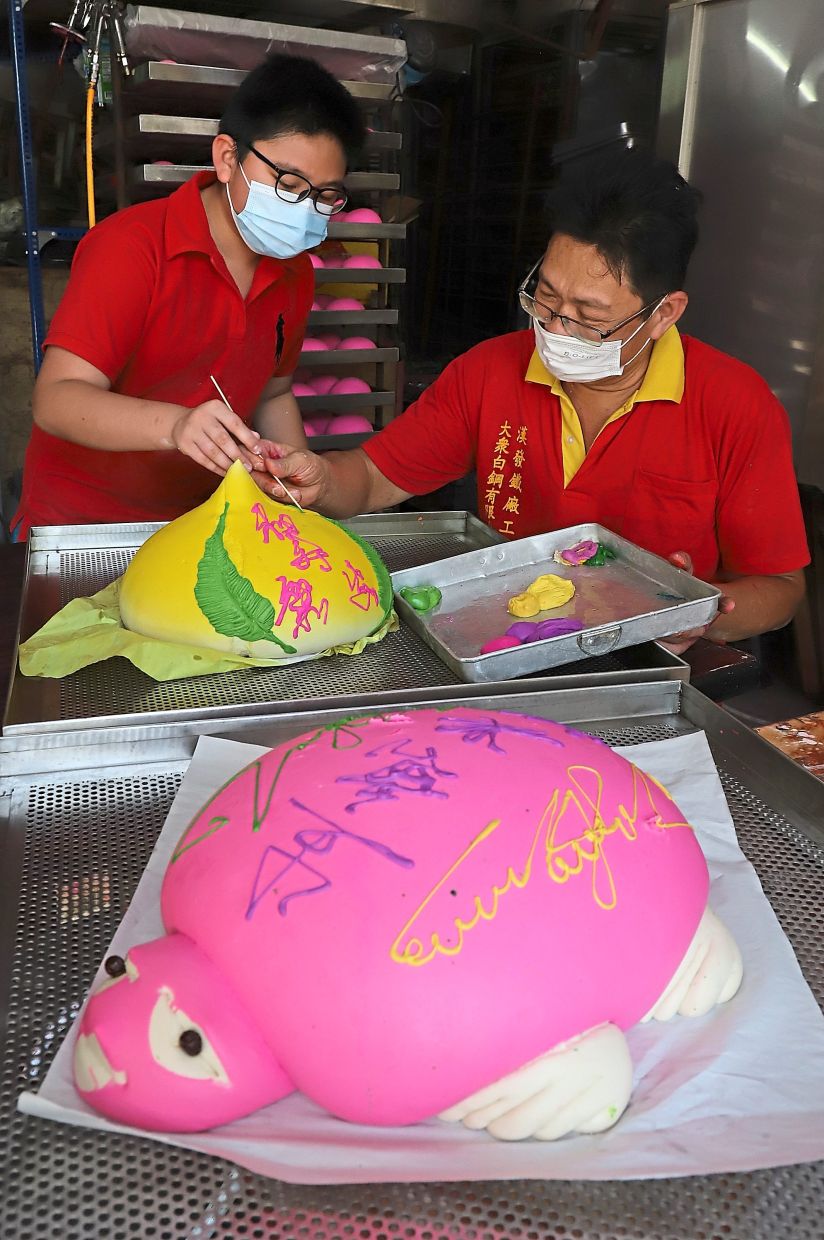 Beng Keat’s son, Vernon, 11, is the latest member of the Ooi family to learn the trade under the guidance of his father and grandfather.

“I have been helping out since I was seven years old.

“I love to knead the dough and make it into tortoise shapes, ” he said.

Bai Tian Gong is the prayer to give thanks to Jade Emperor, who is the divinity said to have rescued the ancestors of Hokkiens from an invading army.

Legend has it that Hokkiens from Fujian province in China survived persecution by hiding in a sugarcane plantation on Chinese New Year Day for nine consecutive days.

Hokkiens have since then celebrate Chinese New Year on a grander scale on the ninth day of the Lunar New Year. 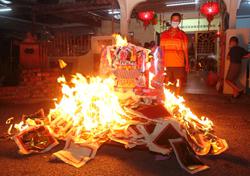